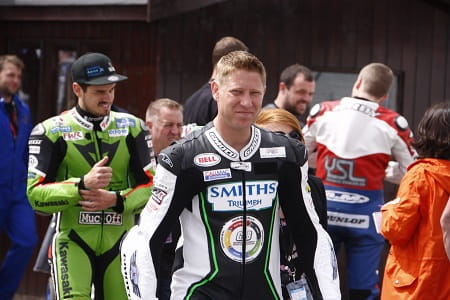 Gary Johnson has broken his collarbone and cracked a verterbrae in his neck in an incident during today’s Royal London 360 Superstock TT race. Johnson, who won yesterday’s Monster Energy Supersport race, crashed out of today’s four lap race at the Ramsey Hairpin on the first lap.

Johsnon was conscious after the incident and was subsequently airlifted to Nobles hospital. His Smiths Triumph Supersport team tweeted to say he had a broken collarbone but was in good spirits already winding up the nurses. He is currently undergoing further scans.

Johnson had impressed in practice for the Superstock class, in which he was competing aboard his own Lincs Lifting Ltd Kawasaki ZX10R. Setting an impressive lap of 130.207mph on Friday night, Johnson was one of the sure favourites for the race. His victory in the Supersport TT marked his second round the mountain course and the first for Triumph since 2003.

All at Bike Social wish Johnson a speedy recovery.