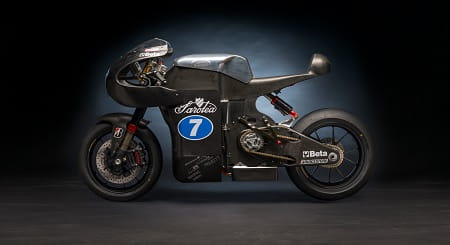 Belgian clean emmissions racing team Sarolea Racing has today confirmed that they will participate in the 2014 TT Zero Challenge with Scotland’s Robert Wilson representing the Belgian outfit in the electric race at this year’s Isle of Man TT.

Wilson, who made his TT debut in 2011, will compete aboard the 2014 Sarolea SP7 which was both designed and built in Belgium and comprises of a carbon fibre monotube chassis and efficient axial flux motor. The bike was designed with a focus on achieving a high power to weight ratio and aerodynamic efficiency. An extensive use of carbon fibre and lightweight alloys helped reduce the machine’s overall weight.

Wilson has recorded five top twenty finishes in the last three years, including a thirteenth place finish in the 2012 Supersport race. He will join big names in the TT Zero class, including TT hero John McGuinness and Bruce Anstey who will compete aboard Mugen’s all-new bike.

"The Isle of Man TT is the most prestigious motorcycle race in the world” said Project Manager, Torsten Robbens.

“Its 37.73 Mile laps also make it the most challenging event for both rider and machine. The TT zero testing programme will focus on optimising the race strategy and aerodynamic efficiency. The combination of the TT Zero challenge and the FIM world cup represents a really ambitious racing programme for us."

Michael Rutter has won the TT Zero race for the last three years aboard the MotoCzysz but will not compete in this year’s race choosing to focus on his superbike campaign with BMW and Supersport campaign with Triumph. The lap record is currently 106.675mph.