'All guns blazing' for McGuinness in Senior TT 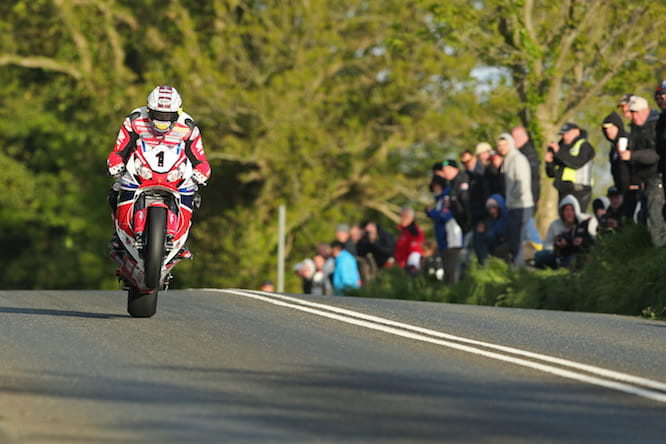 22-times Isle of Man TT winner John McGuinness has said he will come out of the blocks all guns blazing in this afternoon’s Senior TT after what he admits has been a disappointing TT so far.

McGuinness finished off the podium in the superbike, supersport and superstock races but is determined to rectify that in the six-lap senior this afternoon.

“I felt I could win coming into this year and I don’t know why it hasn’t happened yet,” McGuinness said talking to Bike Social. “In the first superbike race I lost my tear offs in the first three miles, we had the worst pit filler in history and lost a lot of time in the pits when we deserved a podium.

“I’ve done 131.5mph laps so I know I can do it, I just need to set off at that speed and we’ll be in with a good shout. I pulled it out of the bag two years ago so there’s no reason we can’t this year. I’ve just got to concentrate, think about it and I know I can do it so we’ll draw a line under the rest of the week.”

“I don’t know what we’re missing, it only takes one thing to go wrong in the race and that’s it. Two or three years ago three people could win now it’s ten people! Hutchy is on fire so the depth of the field is much stronger. I’m not riding too bad there’s just tonnes of others riding fast as well, it’s not easy.

“We’ll come out all guns blazing, we need to get out of the traps fast. I don’t want Hillier to catch me but everyone’s getting better and I’m staying stagnant, I just need to sharpen myself up. If I ride the way I know I can ride then I’ll be in the hunt. The first 12-15 miles are so important and if you’re behind in that you’re not going to get it back, no chance as they’re too fast. Important thing with the Senior is being there at the end, things happen towards the end of the race and if you’re in a strong position at the end it should be ok.”