BSB | Haslam on his dominance: “I don’t feel I’ve taken too many risks this year” 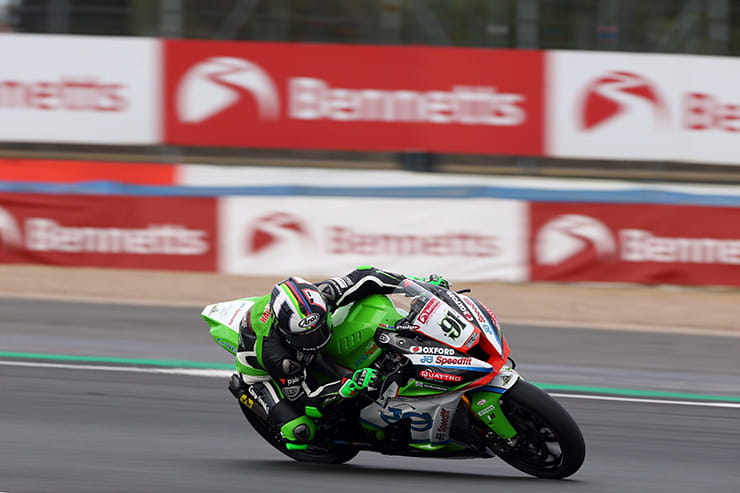 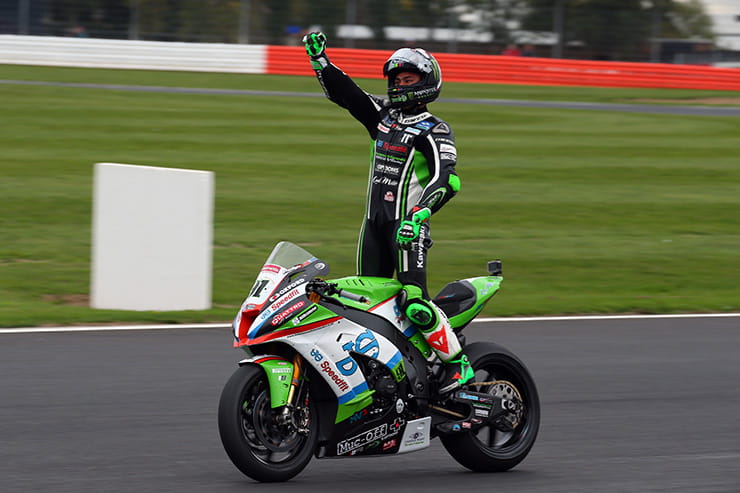 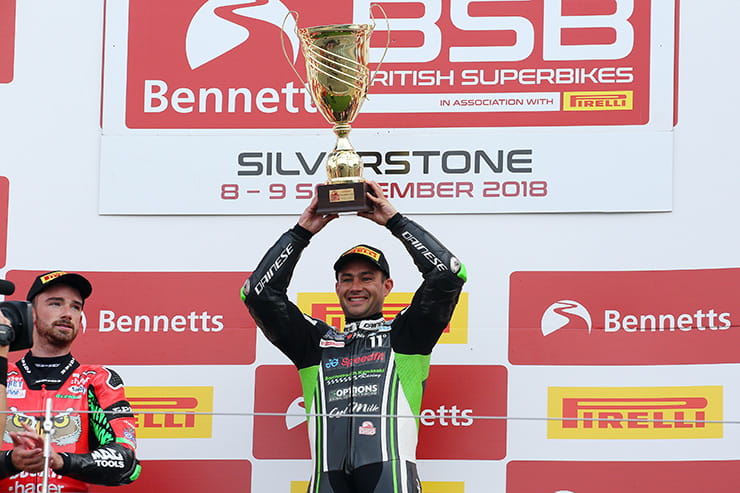 Bennetts British Superbike Championship leader Leon Haslam described his Silverstone weekend as “fantastic” after he walked away with a hat-trick of victories at round nine of the series, battling in all three races with a winning margin of 0.171s, 1.472s and 0.075s respectively.

The JG Speedfit Kawasaki rider had already secured his place in the 2018 Showdown by Cadwell Park but Haslam set out to increase his podium credits lead as the regular season ended on Silverstone’s National Circuit.

The Derbyshire man picked up the maximum 75 points and 15 podium credits available this weekend which extended his points gap to 45 points over second placed Jake Dixon, as the points are set to 500, and podium credits added.

Although the soon-to-be KRT factory Kawasaki rider in World Superbikes admitted to BikeSocial that the amount of victories in 2018 and his current winning streak is more important to him, as he aims to collect a career first British Superbike Championship. 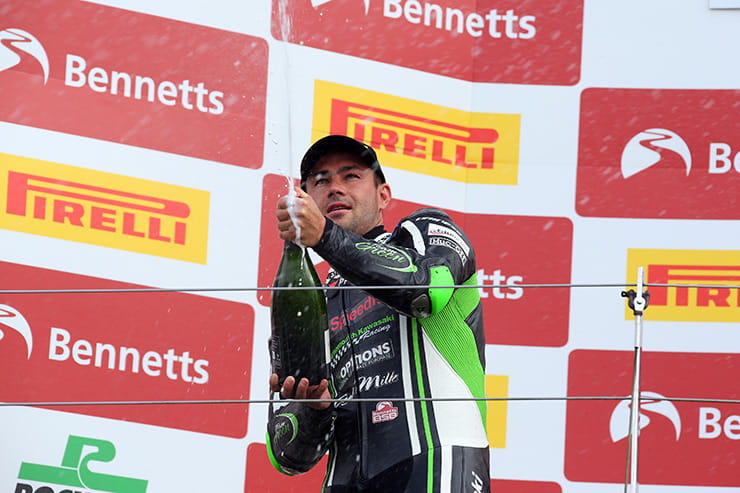 “Three wins and five in a row from Cadwell is great, but the big one for me is 12 wins out of 19,” revealed a happy Haslam. “They are stats I haven’t dreamt I would achieve and they’ve been from nice battles and good, consistent hard racing. None of them have been gifted wins.”

“I’ve had to fight for them, and from my point of view it’s been so far so good, but this is where the Championship starts now, and we have to keep doing what we’re doing.”

The ‘Pocket Rocket’ heads into the final three rounds of the campaign, and the last seven races under no illusions. In the previous two seasons Haslam has led the series within the Showdown, but he wasn’t able to continue his glorious form to secure the title.

2016 saw Haslam crash out of two races within the Showdown, allowing Shane ‘Shakey’ Byrne to collect the title by 29 points. The very next season, mechanical trouble plagued him as he had one hand on the trophy.

The JG Speedfit Kawasaki rider dramatically lost his brakes in the final race at Brands Hatch, crashing out heavily at Hawthorne, breaking his ankle in the process. This once again allowed Byrne to lift the title, taking his second Championship in as many years from under the nose of his closest rival. 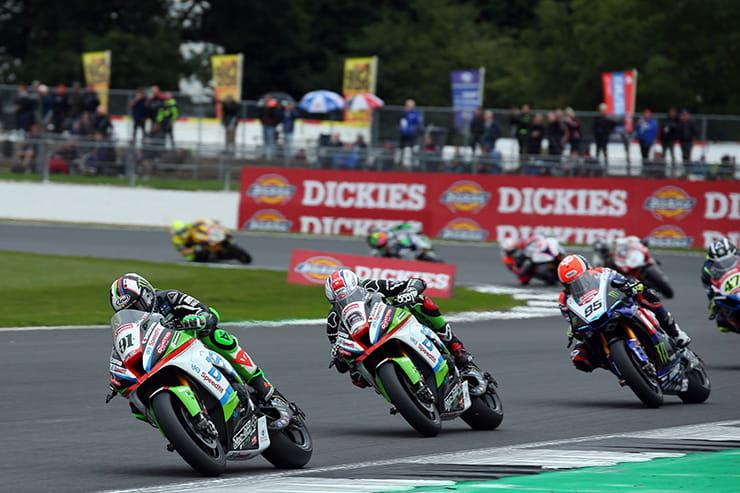 Haslam snatched a hat-trick at Silverstone

But, when asked if he’d learnt from his previous disappointing Showdown experiences, the 35-year-old expressed that he knows it’s vitally important to cross the line, even if it isn’t on the top step.

“I haven’t learnt much really, from 2016 I’ve learnt not to crash in the showdown when up against Shakey, I lost it from that really!”

“Last year I went into the last round with a large lead and we had three mechanical issues and you can’t really learn much from that. The team is so much better and fingers crossed we can keep this up and keep plugging away.”

No British Superbike rider has ever entered the Showdown with as large of a lead than Haslam has. The only man to come close to his tally was Byrne in 2014, but he was still six points behind what Haslam has collected.

Nevertheless, Haslam knows that he has work to do to get his hands on the trophy, and knows that he can’t become complacent over the next seven races. 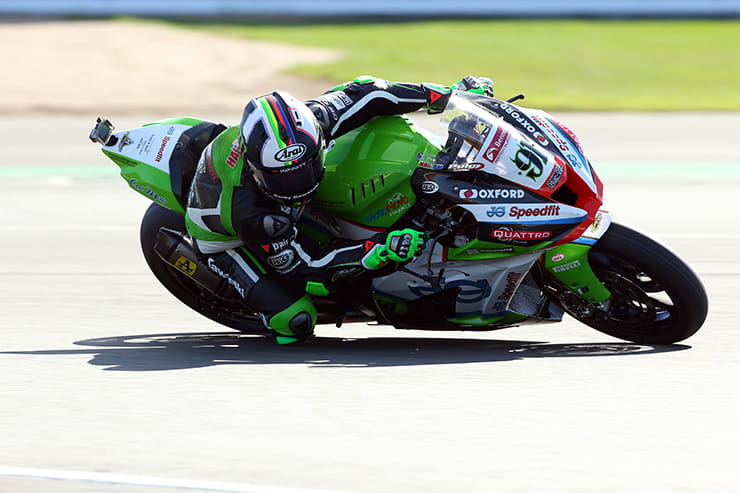 Haslam is breaking all records in 2018

“Someone can go and win seven races and they can still win the Championship, I have to keep pushing on, keep doing what I’m doing and not worry too much.

“I don’t feel I’ve taken too many risks this year and if I keep riding the way I am I’ll get the job done.”

This season has seen Haslam take 12 victories and four podiums in 19 races, and he has just three finishes outside of the podium scoring places with no DNF’s.

Haslam’s domination has seen him break all sorts of records including the highest amount of podium credits and the largest lead over second place, and he admits that his mentality has helped him achieve such great success in 2018.

“This year I have been riding within myself,” expressed Haslam. “I know that when you override, that’s when the mistakes come and the accidents. It just happens that I haven’t done that in any of the races this year, but if I can’t win on the day then I will settle. I’ve learnt that over years, but so far this year it’s been enough to win so that is what I’ll carry on doing.” 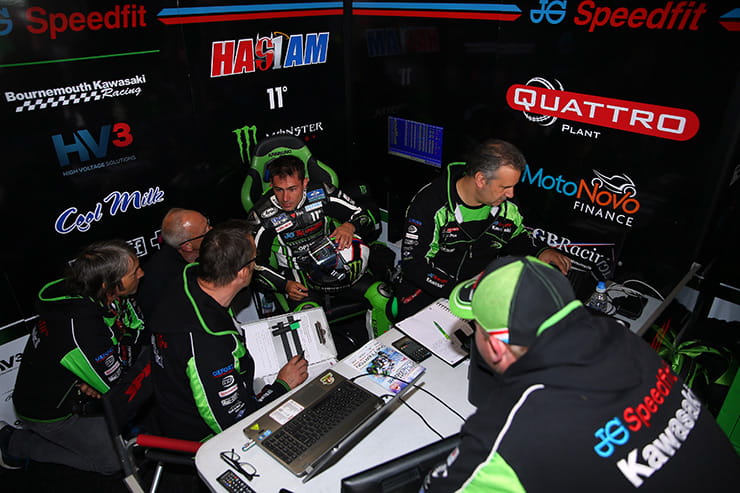 Haslam has a strong support crew around him

2018 looks certain to be Haslam’s year, and the records suggest that. Although he won’t be alone in such a nervous run in for the former Grand Prix star, he has a strong presence in his father, Ron Haslam, by his side every step of the way.

Since Leon’s return to the British Superbike Championship in 2016 ‘Rocket Ron’ has played a vital part in his son’s growth, moving into a spotter role he helps his son with video footage throughout a weekend of his lines on track against his rivals, plus assisting with set-up information.

His wealth of knowledge and experience will be vital to Haslam junior as he heads into the most important three rounds of his Bennetts British Superbike career, and Leon admitted that nothing will change in his preparation ahead of the final seven titanic battles at Oulton Park, Assen and Brands Hatch.

“My Dad is a big help, he goes out and watches and he helps me, the bike and the team, so we’ll keep doing what we are doing. I don’t want to change too much, it’s going well, and we’ll concentrate on ourselves and keep doing what we’re doing.”

The Bennetts British Superbike Championship heads to Cheshire on September 14/15/16 with two races on Sunday afternoon.

Haslam doubled up on victories at that very circuit earlier on in the season, which can only bode well for the Championship leader as he aims to make a strong start to the Showdown shoot out.

Tickets are available from https://oultonpark.msv.com/OP-18-BSB-2 with prices starting from £28 for race day Sunday.