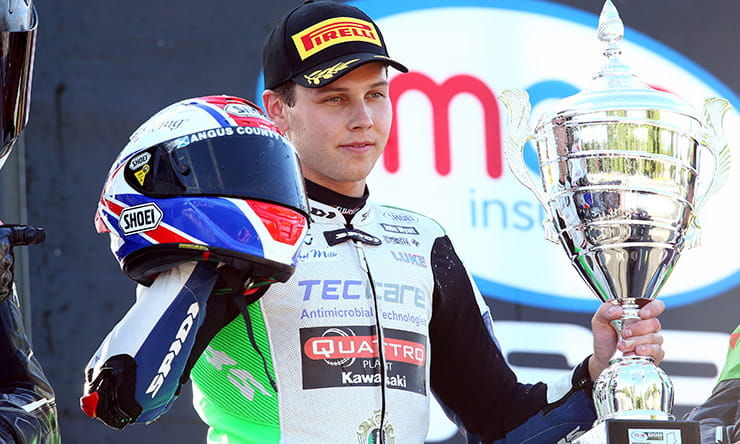 In a weekend that Quattro Plant Teccare Kawasaki rider Luke Mossey will never forget, the Cambridgeshire lad placed himself in the top six ‘Showdown’ for the final battle for the British Superbike Championship, as well as becoming a Dad for the first time. Meanwhile, Leon Haslam laid down a marker for the final three rounds as he took a fantastic triple to at Oulton Park to top the series.

Mossey found out the news that his new daughter had arrived at five thirty this morning and straight away admitted he felt different, but now he has cemented his place in the showdown for the battle to be the 2016 British superbike champion, he admitted he wants to move to a new level.

“Now we are in it I feel like I want to dig deeper now,” expressed Mossey. “We really want to try and get our first race win this year. Last year we only just missed out on the showdown, and that was our aim from the start of the year right from preseason testing. So now we are here it’s a massive weight off my shoulders, we’ve had some ups and downs with the weather conditions this year but I’m delighted.”

Race one saw James Ellison grab the holeshot from fifth on the grid, and instantly started fighting with his team mate Leon Haslam for the lead. Then on lap five, title favourite Shane ‘Shakey’ Byrne dropped his Be Wiser Ducati at the Hizzy’s Chicane and crashed out of the race.

It was then left to Haslam and Ellison to fight it out for the win, and due to Haslam’s tyre choice of the harder compound rear tyre, he had more grip left to pull away from Ellison. He took his second win of the weekend, and another double podium for the JG Speedfit Kawasaki team, with Dan Linfoot rounding out the podium in third.

Race two saw Honda's Jason O’Halloran grab the lead from pole position, and straight away he had a fight on his hands with Haslam. The ‘Pocket Rocket’ kept swapping places with the Honda Racing man, and after a safety car intervention, the Kawasaki rider made his move and led from the front.

Already cemented in the showdown after his result in race two, Ellison unfortunately dropped out of the race from second place, due to a technical failure with his bike.

After a poor start Byrne fought his way through the field to a respectable fifth place, after being as far back as 13th mid race, but all the spoils went to Haslam who took his third win of the weekend. He also took the lead of the championship lead due to his podium points haul, but only by three points.

However, it was Mossey who stole the day, sneaking into the showdown at the expense of Tyco BMW’s Michael Laverty.

“It’s definitely the best day of my life,” said Mossey. “I had my daughter this morning, little Emmy, and I’m absolutely over the moon to get this showdown spot. Since I came into the team at the start of last year they have had every bit of faith in me, chucked everything I wanted my way, I’m so glad to repay them with this.

“My girlfriend rang me at half past five this morning to tell me she had arrived, and straight away I felt different, and all day I’ve been feeling the same. I’m not saying I’m going to grow up but I’m over the moon and I can’t wait to see her, even if she’s asleep when I arrive home she’s getting woken up for a little cuddle.”