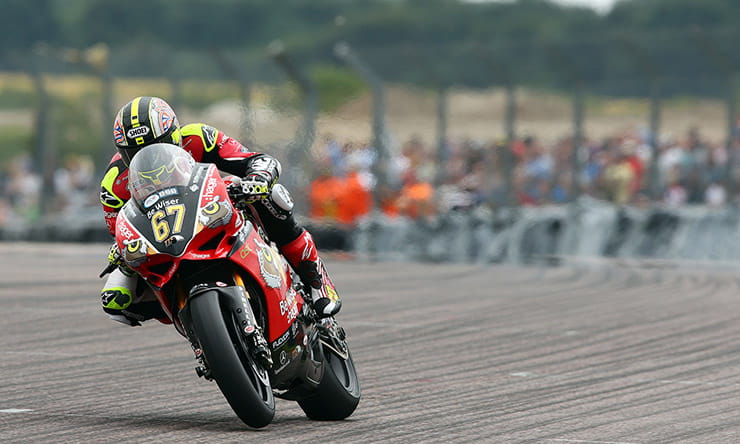 Shane Byrne consolidated his British Superbike Championship lead after winning in race one at Thruxton, however a technical issue forced him out early in race two allowing Michael Laverty to take his second win of the season from a hard charging Jason O’Halloran.

The first race saw pole sitter ‘Shakey’ get off to a flyer, gapping the battle for second, achieving a new lap record in the process. The fight behind soon heated up with eight riders dicing for position.

Then on lap nine, EPayMe Yamaha’s sole rider Stuart Easton had a mechanical problem, forcing a stoppage to proceedings due to oil being leaked on the track.

Starting from the positions the riders were in on the lap the race was stopped, Byrne made a another great start from pole although it was Laverty who grabbed the holeshot on his Tyco BMW. However, it didn’t take long for Byrne to make his way past and gap the Northern Irishman.

Tyres then came into play again, with Byrne conserving his softer rear Pirelli the best, eventually crossing the line to take his 72nd career British superbike win. Laverty was second with young charger Luke Mossey in third on the Quattro Plant Kawasaki.

Prior to race two, spots of rain fell over the 2.9-mile circuit, forcing a further delay to proceedings. However, the track was dry for the start of the race and it was the Honda of O’Halloran that rabbed the holeshot, only for Byrne to bite back and take the lead in turn two.

The following lap saw the championship leader forced to retire with a broken gear shifter on his Ducati, leaving Laverty, O’Halloran and Haslam to battle it out for the win. JG Speedfit Kawasaki rider Haslam then made his way past O’Halloran, and went in search of the race leader Laverty.

Tyre degradation again started to play its part from half race distance, with Haslam dropping back to fifth place at the flag. Laverty controlled from the front, holding off O’Halloran to take his second win of the season.

Be Wiser Ducati’s Glenn Irwin forged his way through the field from as far back as 14th at one point in the race, after conserving his rear tyre better, taking his first ever British Superbike podium in third.

“I’m really delighted,” said Laverty. “It’s been too long coming, we’ve just been a little bit unlucky at times. We should've won at Knockhill, we were fast enough at Snetterton but crashed three times and it was one of those weekends. It’s nice on a circuit I didn’t expect to win on to come out with a one-two. My team have done an awesome job, I had to ride patient races and it paid off at the end, it’s perfect.”

Second place in race two, O’Halloran added: “To get a podium here at Thruxton, the circuit where I broke my femur here last year, is nice to put that to bed. We had great pace all weekend, and our worst session was Q2, which was the most important and I was devastated to be starting 11th.

“But to come through from 11th to third in race one and then drop back to where I finished because of the tyre was disappointing. So in race two I was determined not to use as much of the tyre at the start and keep it going, it was lucky I did because the last two laps were really tough. I’m over the moon with this, 20 points, I’m absolutely peaking.”

“With three or four laps to go I thought it was possible,” said a jubilant Rookie Irwin. “With two to go I saw I was catching Leon (Haslam). I did a really good job saving my tyre, thinking about it now I maybe saved it a little bit too much, but it’s my first podium. It was nice to cross the line showing that if the race had gone the full distance then what might have been, it was mega.”

Byrne still leads the championship race by 15 points from Haslam, who had a weekend to forget after suffering tyre troubles all weekend.

James Ellison jumps into the all important top six at the expense of Christian Iddon, who again struggled with tyre issues all weekend.