Haslam is King of Cadwell's Mountain 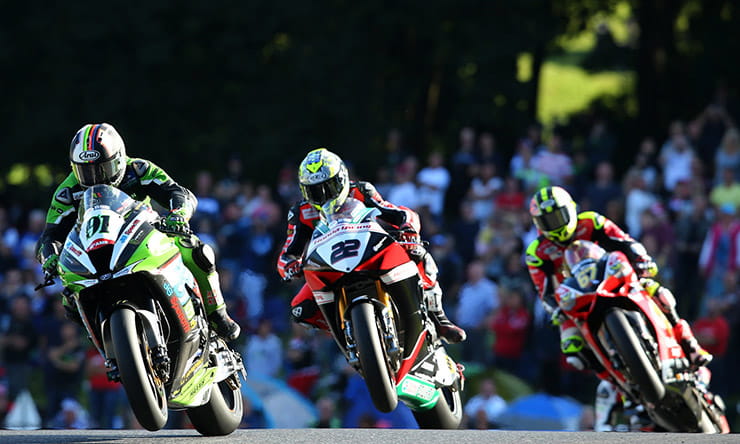 It was a win apiece for Shane ‘Shakey’ Byrne and Leon Haslam at Cadwell Park in today’s Bank Holiday thriller, meaning both men are confirmed Showdown contenders for the 2016 season, alongside Honda Racing’s consistent Jason O’Halloran who took his first double podium of the season.

Race one saw Byrne take victory under the nose of Haslam on the final lap, which left the Derbyshire man hungry for more, and he duly delivered in race two after conserving his tyre the best to pull away at the end of the race.

“We knew the bike had the pace, we knew we were going to be strong here,” expressed Haslam. “I was so frustrated after race one and we knew we we’re going have to do something different for race two and I tried to manage it the best I could. All the best plans never quite go that well and it managed to work out perfectly.

“I tried to slow the pace up and save the tyre, and I managed to get some good pace at the end I did make a mistake with about four laps to go at the bottom of the mountain, but it’s a big credit to the team. It’s been a hard three or four rounds and Shakey has had a big gap on us so to beat him here we can go into Oulton with our heads held high and finish the season hard.”

Race one saw Byrne grab the holeshot from Haslam from second on the grid but instantly the JG Speedfit Kawasaki rider fought back to take the lead at Park corner, as Richard Cooper followed behind in third.

By the start of the fourth lap Haslam had made a mistake and dropped back to third place behind a charging O’Halloran, meaning ‘Shakey’ took the lead. However, the ‘Pocket Rocket’ then regrouped and started to chase down the leader, in the process beating his own lap record on lap seven.

With two laps to go Byrne (right) had caught Haslam and was looking for a way past, then on the last lap around Chris Curve Byrne made a brave move under Haslam and made it stick to take his first win at Cadwell for 13 years, and secured his place in the 2016 Showdown.

Race two saw O’Halloran make the best start to grab the holeshot, but Byrne immediately fought back to take the lead. The safety car was then deployed after a crash between Howie Mainwaring–Smart and Filip Backlund.

After three laps under the safety car conditions the race resumed and straight away Haslam looked for a way past the Championship leader. It took until the next lap for Haslam to make his move at Park, but thanks to the safety car, Haslam’s tyre was conserved and he was able to pull away, setting the fastest lap of the race on the 16th lap.

The battle was then on for second place between adopted Lincolnshire man O’Halloran and Byrne, the ‘O’Show’ made a slight mistake with two laps to go at the final corner but held off a charging Be Wiser Ducati to take his first double podium of the season.

“I’m really surprised to be honest,” said Byrne. “We ran the bike exactly the same as race one, obviously with new tyres, but the bike moved around quite a lot, I was a lot more sideways than I was in the first race. We’re in the showdown now which is great, and I’m really looking forward to Oulton Park to see if we can get another couple of wins there.”

Haslam now trails Byrne by 21 points overall in the title challenge, and is only 12 podium credits behind the four-time champion. The battle is now on for the remaining three showdown spots, which will be fought out at Oulton Park in two weeks time, with Michael Laverty, Dan Linfoot and James Ellison currently occupying those positions.

This battle was shaken up when Buildbase BMW's Cooper was wiped out by fellow Showdown contender Christian Iddon in the latter stages of the second race. The crash sees Cooper drop down to seventh, while Iddon's run of bad luck continued with two crashes leaving him 10th in the standings. Bennetts Suzuki's Tommy Bridewell outscored all but the top three at Cadwell with fourth and fifth place finishes. He is 31 points adrift of sixth placed Ellison, leaving him a with a slim chance of making the cut in the Oulton Park triple header.