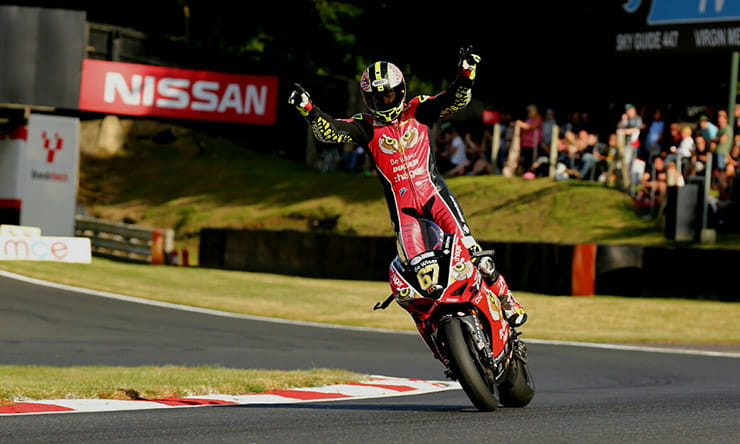 Local hero Shane Byrne took his first double win of the 2016 season, after dominating once again at Brands Hatch and stretching his championship lead to 25 points Leon Haslam.

It wasn’t all plain sailing for Byrne though. He didn’t have his own way in either race, but showed his class by carving through the field on his Be Wiser Ducati Panigale.

“It’s actually not been as easy that it might have looked, practice looked like we were really, really strong and we looked really good but actually we were struggling with feeling from the front of the bike,” Byrne said after the second race.

“I had a problem in superpole and ended up second but front row is front row, I was cool with that. Race one I got an abysmal start and that made the race really difficult. The setting we had in the bike for the first race wasn’t quite there either.”

Race one saw 'Shakey' fluff the start, dropping back to sixth place after lap one, with pole man Luke Mossey making a great start and grabbing the holeshot.

The Quattro Plant Tec-Care Kawasaki man started to pull a lead on second place man Haslam, who made a brilliant leap from fifth on the grid. Then on lap ten the safety car was deployed due to a heavy crash for Filip Backlund at the final corner.

After backing the field up, Mossey continued his lead from the front after the course car pulled in, with Haslam and Bennetts Suzuki’s Tommy Bridewell, running a one-off Barry Sheene tribute livery on his GSX-R1000,  on close attendance.

Making up for his poor start, Byrne started to pick his way through the pack, and by lap 16 he made his move to take the lead going around the outside at Hawthorn corner.

Byrne made the move stick and held off a hard-charging Haslam on the final lap to take his sixth win of the season. Mossey picked up the pieces after a crash for Tommy Bridewell saw him fall out of the final podium position on the last lap.

Race two saw Honda Racing's Jason O’Halloran make the most of his fourth place start and grab the holeshot, leading from the front. Haslam seemed to have a problem, and dropped back into the pack but carried on, alongside Byrne, who was back in 11th after another bad start.

Mid-race Glenn Irwin made his way through the group of riders ahead and followed O’Halloran for most of the race, until Haslam barged his way past and went in hot pursuit of the Australian. Bridewell, once again looking strong on the ageing Suzuki, dropped out from the leading pack with a technical problem.

Byrne then fought his way past his team mate with six laps to go, and soon joined the leading party of O’Halloran and Haslam, then with four laps left the safety car reappeared due oil dropped from Michael Laverty’s Tyco’s blown BMW.

Two laps were added after the car came back into the pits, meaning it was a dash to the flag for the leading five. Byrne took the lead with four laps to go and created a manageable gap between second place man Haslam, who took second place by 0.006 from the ‘O’ Show’, who maintained his 100% race finish record this season.

“It’s been a really, really difficult weekend in some ways but ultimately the end result has been a double win, it’s our first double of the season,” added Byrne.

“It has taken its time coming, but like I said from the word go when we took this project on we knew it was never going to be just jump on the bike and start smashing out doubles.”

This weekend also marks Byrne’s 15th career win around the Brands Hatch GP circuit. “It’s been lovely, I think we were far stronger at Thruxton than we ultimately were here but to drag out two wins in my back garden is a great feeling. I’m going to go back to Spain tomorrow to see my wife and kids, and it’s going to be a nice flight!”