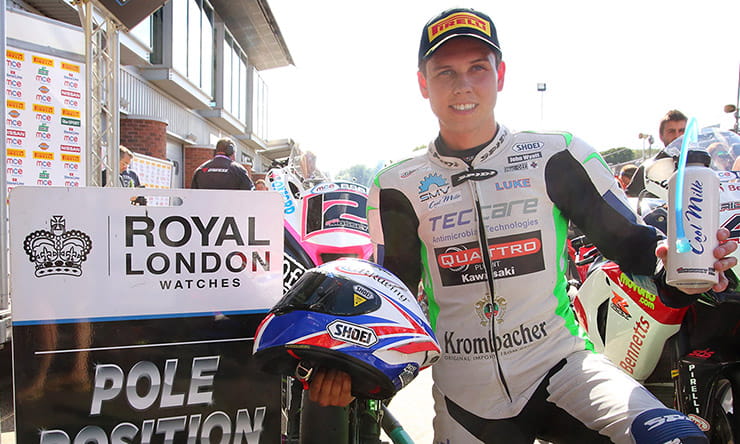 Quattro Plant Tec-Care Kawasaki’s Luke Mossey stunned the crowd at his home race at Brands Hatch by taking a surprise pole position ahead of Shane ‘Shakey’ Byrne this afternoon.

Byrne was the final man on circuit after being fastest throughout qualifying, however made mistakes in the opening sequence of corners meaning Luke Mossey’s 1:25.383 would be good enough for pole for the second time this season.

The Cambridgeshire man looked comfortable throughout his superpole lap, but did admit afterwards he thought the Be Wiser Ducati man would pip him to pole. “I wasn’t really looking at Shakey’s times to be fair because we knew he would be the man to beat after his performance at Thruxton,” said Mossey.

“We had loads of issues yesterday with the bike and I wasn’t happy at all, especially after the crash I had in FP2 and it felt like we were really on the back foot. We went to bed last night scratching our heads, but the boys cured the problem.

“I knew we could do the times, not so much as to what Shakey has done because he’s done a 1:24.8 and I didn’t think we would be able to get anywhere near that, but I knew I had a low 25 in me.

“So to get pole position for the third time here I’m over the moon and I just hope we can convert it into two rostrums tomorrow, because we need to keep racking up the points.”

It could have been disaster for Mossey who in Q2 had a technical issue, in which his throttle cable snapped. Due to a red flag caused by Kuba Smrz’s engine blow out, the 23-year-old cruised back to pits. His team worked quickly to send the former supersport rider out on track, and on his final lap he knocked James Ellison out of the final session into tenth.

Byrne’s lap time was a surprise to the watching home crowd as he had dominated every single practice session. And afterwards the four-time champ admitted he made numerous errors on his crucial lap. “A little bit of me really wanted to push the boat out this afternoon and produce something pretty special. I got onto the brakes into Paddock Hill and ran a little bit too hot into there.

“I thought it’s ok, just calm down you’ll get it back at Druids, and then I outbraked myself there and then I messed up Graham Hill, and then I braked really, really late for Surtees and completely missed the apex there.

“Then I just thought stay upright and finish. It wasn’t a very good lap for me at all, luckily it has put me in second place, and with that many mistakes I think it’s pretty good.”

First out in Superpole was Bennetts Suzuki man Tommy Bridewell, after impressing all weekend with his pace, although following his lap he returned to his garage alone not expecting a front row start. “I went and sat in the garage, alone in the quiet. I don’t why I was disappointed because I don’t know what I was expecting, I’ve only done a 25.6 and I knew I couldn’t match the pace of the other guys because over one lap I just can’t do it.

“I can’t get the benefit of a new rear tyre, I was just a little bit frustrated but in the same degree to get on the front row is massive for me because my race pace is strong, and it will make my life a lot easier so I’m just going to charge from the front and see what we can do.”

Row two will see Broc Parkes line up in fourth place, ahead of Glenn Irwin and Leon Haslam. Row three see’s Buildbase BMW’s Lee Jackson in seventh with his team mate Richard Cooper in eighth ahead of Jason O’Halloran, who crashed out heavily at Hawthorn bend on his superpole lap.

The major casualties in the second 12-minute dash were James Ellison who qualified tenth and Michael Laverty in eleventh.

Q1 saw Laverty scrape through by the skin of his teeth on the final lap, after experiencing technical problems. Three-time British Superbike Champion Ryuichi Kiyonari was knocked out of proceedings, alongside Billy McConnell who impressed at Thruxton.