Gravel trap to front row for injured Linfoot at Snetterton 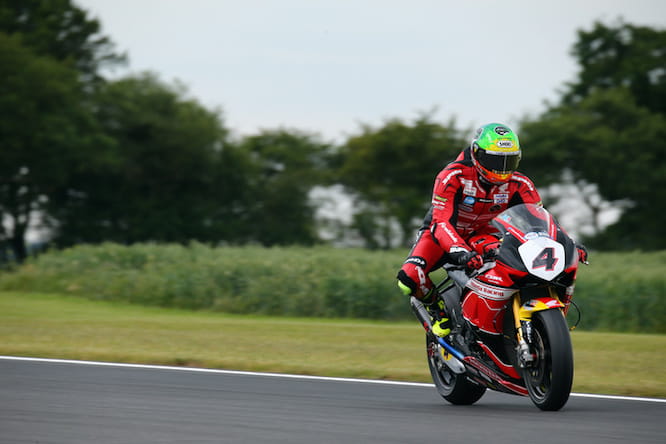 Dan Linfoot defied the odds at Snetterton this afternoon by qualifying on the front row in his return to the 2015 British Superbike Championship at Snetterton.

The Honda Racing rider was forced to miss the last two rounds after breaking his wrist in a practice crash at Brands Hatch. Returning to action this weekend, Linfoot acknowledged it would be difficult and difficult it has been, with the Yorkshireman struggling to touch the top ten throughout practice.

It looked like his tough weekend would continue in Q1, as he languished in the drop zone in the first ten minutes even slipping off his CBR1000RR. With no damage, he was able to return to the pits before heading back out on track and progressing to Q2 by the skin of his teeth in 20th place.

When the rain came down in Q2, Linfoot had set a time fast enough to progress to the next session while other riders were caught out by the conditions. The conditions provided somewhat of a leveller, as Linfoot then went on to set the third fastest time in Q3 behind polesitter Byrne and teammate Jason O’Halloran.

“That was a bit of a rollercoaster for me as I was down on my arse in Q1!” said Linfoot speaking to Bike Social after qualifying. “I managed to get back on the bike, I think it was OK and in the rules as I rode to the pits and they let me out again and I managed to scrape through into Q2.

“We’ve been struggling this weekend as we’ve missed a lot of track time over the last few races, so it wasn’t great to be down in 20th but at least we were through into Q2 and then the rain came! I managed to get a lap in good enough for Q3 before the rain came which was a stroke of luck to be honest!

“I assessed the conditions in Q3 and then headed back before going out again. I saw Jason come past and thought I would tuck in behind.

“I needed a confidence boost for my first race back after breaking my wrist and that was just the trick! Hopefully I can hold on at the front tomorrow and bring back some good points.”