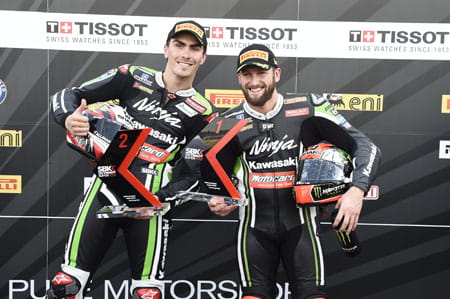 Tom Sykes couldn’t have made his intention to defend his World Superbike Championship title any clearer at Aragon this weekend… The British rider clinched both victories at the second round of the series and now heads the championship standings.

In the first race, Sykes led the field from start to finish – a calculated ride seeing him extend his advantage lap-by-lap over the course of the race.  Although Loris Baz attempted to challenge his Kawasaki team-mate in the early stages, he didn’t really come close, instead settling for the second step of the podium and the first Kawasaki 1-2 in over 20 years.

PATA Honda’s Jonathan Rea and Ducati’s Davide Giugliano found themselves in a battle for third, with Brit Rea securing the spot after the pair made contact at the hairpin. While Rea managed to keep his bike upright, Giugliano slipped from his Ducati and although he was able to remount and re-join the field, eighth at the chequered flag was the best he could manage. Welshman Chaz Davies scooped fourth, while Eugene Laverty rounded off the top five places.

Sykes had a tougher ride in the second race of the day – battling with a persistent Baz and then Aprilia’s Marco Melandri in the final laps. Although it looked like the Italian was set to take a last gasp win, Melandri lost momentum on the straight, enabling Sykes to re-pass him on the bend. The move also enabled Baz to secure another second place finish.

Kawasaki duo Sykes and Baz now lead the standings with 75 and 71 points respectively ahead of round three, Assen, on 27 April.