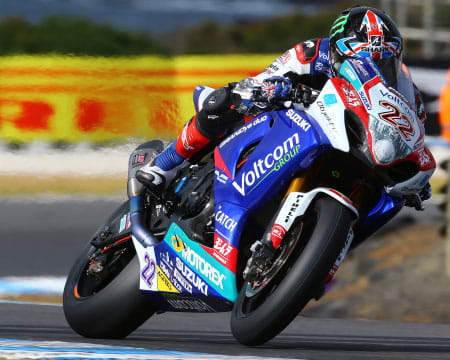 Alex Lowes has said he is disappointed with his results from this weekend’s World Superbike opener in Phillip Island after taking home just three points, despite running at the front throughout testing and Free Practice.

Falling on Saturday in a free practice session, Lowes dislocated his ankle but was miraculously back on track for Superpole later that day, qualifying a respectable fifth on the grid. Suffering a poor start in the first race, Lowes managed to break back through into the top ten before a crash at the first turn saw his first race with Crescent Suzuki end in the gravel.

Lowes made a better start to the second race but ran on at turn one, leaving him in twenty-first place. Nevertheless, he was back and fighting within the top ten in just five laps. With his ankle injury making it difficult to change gear, Lowes made a further mistake at turn four. He eventually crossed the line in fourteenth place.

“I’m frustrated with today. I tried really hard and don’t have a lot to show for it really.” Lowes explained.

“The first race crash, and in the second race the run on, on the first lap and then the crash later was all because I was struggling to change gear with my foot. I had a numbing injection, lost a bit of feeling and I couldn’t change gear so it was hard work! I was riding through the pain, so to just get three points has upset me a bit because we had such good pace all through the test. I’ve never been here before and we were still looking like we could run at the front and challenge for a podium so I’m really disappointed, but I’m going to come back fitter and stronger and we should be ok for Aragon.”

You can read a full round up of the events at Phillip Island here.