Hope for Ducati after Phillip Island 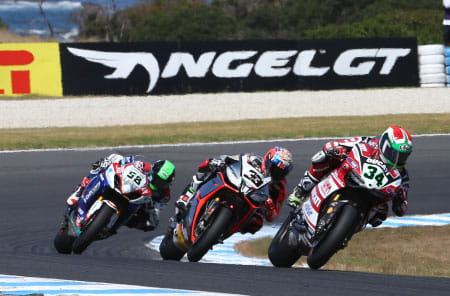 With the exception of a podium for AyrtonBadovini in iffy conditions at Moscow Raceway, Ducati’s best result in World Superbikes last season was sixth place, causing many to rule out the Bologna factory’s 1199 Panigale for 2014.

However, after signing a new rider line up and rekindling a relationship with Feel Racing, Ducati has bettered that sixth place twice after just one round of the 2014 Superbike World Championship.

DavideGiugliano crossed the line in fourth place in both races at Phillip Island after being in contention for the race lead. The Italian also managed to qualify in an impressive second place, which is significantly better than the majority of Ducati’s 2013 qualifying results.

With Ducati going without a victory for the first time in the history of World Superbikes last season, it’s clear they are looking to up their game this year and while the weekend’s results didn’t set the world on fire, it’s a step in the right direction. Even Chaz Davies reckons the bike is capable of more after he could only manage a best result of seventh place. The Welshman set the fastest lap during the first race, showing the 1199 is by no means slow.

“In race 1 I was quite relaxed. I managed to lap fast by only riding at about 70%, saving that extra 30% for the end of the race but unfortunately the grip became an issue maybe five or six from the end” said Giugliano.

“In the second race, I immediately realised that conditions were warmer than the first and so I tried to limit the damage by holding back a little. Then later I started to push and was catching those ahead of me – I think I could have battled for the podium if the race had gone full distance but unfortunately they stopped the race after 14 laps.”

“Anyway, overall it’s been a great weekend. We’ve shown that, as far as the chassis and my riding is concerned, that we’ve arrived. We were consistently fast throughout the weekend and this gives us confidence for the next races. Today’s results are very encouraging for me, for the team and for Ducati.”

“I am a little disappointed in terms of race results” added Davies.

“In race one we had a rear tyre issue and I gradually lost grip from maybe the mid-race point. Race 2 was a little better, I was hanging in there with the front group, managing to edge my way up through the field to about fifth.”

“Then at about lap 10 I felt like I lost power and so I slowed down because I didn’t know what was happening. It was a shame as I think we were in for a better result in race 2. I felt more comfortable, with the team having made some changes between the first and second races. Anyway, there are positives to take away from the weekend. Solid points in each race for example – it’s the first time I’ve scored points in both Superbike races at Phillip Island. I also made the fastest lap of race one. But I know we’re capable of more, everyone’s working hard and the bike is feeling good. Roll on Aragon.”