History made as MV Agusta win at Phillip Island 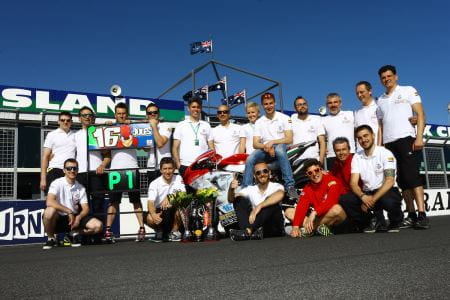 History was made at Phillip Island on Sunday as MV Agusta took their first ever victory in the World Supersport class with Frenchman Jules Cluzel crossing the line in first place after a dramatic race.

Cluzel started the race fourteenth following a tough qualifying session but fought through to eighth in the first few laps, by lap seven he was in fifth place putting pressure on Raffaele de Rosa ahead. The race was then stopped as Jack Kennedy suffered an engine blow out on the Gardner straight, contaminating the circuit.

The eventual result would be decided over a five lap dash and starting from fifth place on the grid, Cluzel made the most of the restart as three-time champion Kenan Sofuoglu and PATA Honda’s Michael van der Mark crashed out on the first lap of the second run. Florian Marino took the race lead from Kev Coglhan and Cluzel’s MV Agusta and held it until the final lap when Coghlan made a move on his DMC Yamaha to take the lead. Seeing his opportunity, Cluzel went on the attack, passing both Cluzel and Coglhan in just a few corners to take the win.

“Amazingly, we were terribly unlucky during all tests and the beginning of the week-end” said former Superbike rider, Cluzel.

“To win in such conditions is a dream! Before the start I told to my mechanics to do everything and I wouldn’t fail. Maybe we are not quite ready to be the first but I didn’t make any mistakes and pushed as hard as I could. I’m sure we deserved this victory. There’s a long way to go but we started well.”