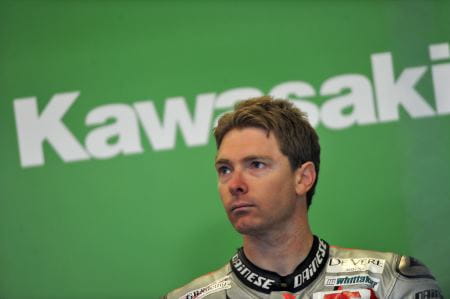 It’s fair to say that luck hasn’t been on the side of Aussie superbike star Mark Aitchison over the last twelve months. This time last year he was signed to ride for Splitlath Aprilia in the British Superbike Championship until the team announced their withdrawal from the series at the eleventh hour. Following this, Aitchison joined the previously-troubled Effenbert Ducati in World Superbikes, however the team’s past soon repeated itself as they withdrew after just three rounds.

Aitchison’s 2013 Superbike campaign was saved ahead of the Silverstone round as he was called up to replace the injured Alex Lundh in the Pedercini Kawasaki outfit. After a slight adjustment period Aitchison ended the season well, including three top ten finishes which mark some of Pedercini’s best results since their switch to Kawasaki in 2008.

“In the end 2013 was pretty positive for me” Aitchison told Bike Social.

“After having little seat time during the first part of the season, I needed to rebuild the confidence and rhythm and by the last few rounds I feel I was riding well with confidence which seemed to transpire into the strong results we had. I was also really enjoying my time at the racetrack, my team were great to work with, and the racing was tight, so overall it was good fun.”

However it would seem bad luck has struck once again for the Aussie who is currently without a ride for the 2014 season, which starts next month at Phillip Island.

“Right now as it stands I really don’t know if I’ll be back in WSB. It feels like I’ve been trying to sort something now for an eternity, with little luck!” Aitchison explained.

“It’s a difficult market for riders at the moment, especially those involved with privateer squads. It’s fair to say there is some uncertainty over the new rule introductions for EVO SBK, which I’m sure has an effect on team’s budgets, which at the end of the day affects the number of seats available.”

Aitchison admits he’s been in talks about a return to the Pedercini team in the new EVO superbike class.

“I’ve been in contact with the Pedercini guys about next season and if we can piece it together it would be nice to be back there. I’ve a good relationship with all the team, after few seasons on and off together, so if it’s a possibility it makes sense to continue for 2014 in the new EVO spec SBK Championship.”

The Aussie is keen to get started in World Superbike’s EVO class ahead of the whole grid moving to EVO spec machinery in 2015.

“I really like the direction the World Superbike Championship is taking for the future. Although the championship may require a small transition period for both the rules to take shape and the fans to further understand the integration of them into the current race format, I believe these changes for the future are very positive for the paddock and most importantly the fans watching from home or at the circuit.”

With time running out to secure a seat for 2014, Aitchison is keeping his options open and hasn’t ruled out a return to the British Superbike Championship.

“My priority has always lied with World Superbike as I love racing in Europe. I love the culture of the European paddock and everything that goes with it, but at the same time with the current climate I need to keep my perspective open. The BSB Championship is another championship which is formidable in competition, and has some unique rules, so if an opportunity arose I would definitely consider it.”