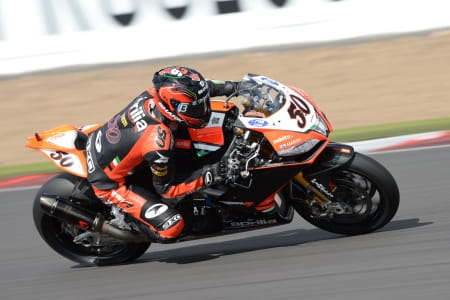 The World Superbike Championship returns this weekend after its summer break, with riders all set to battle tooth and nail in the final stage of the title fight. Sylvain Guintoli’s pure consistency places him at the top of the table as the series heads to the infamous Nurburgring. The Frenchman has finished no lower than sixth so far this season and has only seen one retirement, which was down to no fault of his own.

Tom Sykes hasn’t been on the podium since June, when the series visited Imola two rounds ago. A technical fault ruled him out of finishing in Moscow while in Silverstone, Sykes had a dire weekend despite leading the race at one point. Sykes will need to return to the dominant form he displayed during the mid-season if he’s to attack for the title and there’s no reason to suggest he won’t come back with a vengeance at Nurburgring, the venue of his debut WSBK victory in 2011.

Eugene Laverty has blown hot and cold throughout the season, however out of all the title contenders it was the Irishman who enjoyed the most success at Silverstone with a double podium. Almost forty points behind team mate Guintoli, Norge most certainly has a mountain to climb but as ever with racing, nothing is impossible. BMW’s Marco Melandri sits just five points behind Laverty, facing an equally tough challenge to take BMW’s first (and only) title before they pull out at the end of the year. Nothing but wins will be good enough for Laverty and Melandri if they are to keep their title hopes alive.

Outside the title fight there’s a battle among riders trying to prove themselves in order earn one of seemingly few rides on the WSBK grid next year. Chaz Davies currently sits fifth in the championship and with BMW’s withdrawal, he’s out of a ride for 2013. Winner last time out, Loris Baz is desperately trying to prove to Kawasaki that he should be given the chance to continue alongside Tom Sykes for 2014 over many other riders linked to the second ZX10R. Johnny Rea, Leon Camier, Leon Haslam, Carlos Checa, Davide Giugliano could all also be looking for rides for 2014… Who knows what could happen in this final part of the season?