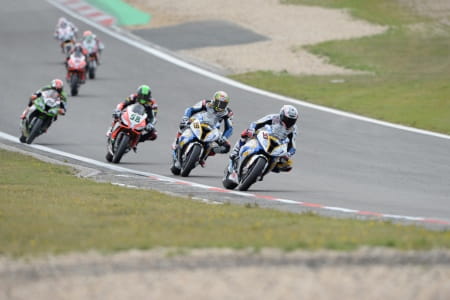 Intercity Istanbul Park will play host to the World Superbike Championship for the first time ever this weekend. Istanbul hosted rounds of MotoGP between 2005 and 2007 however the circuit has never hosted the production racing series. With it being a technical circuit, experience could prove crucial at Istanbul and there are only a few who’ve been there before.

If you were to pick a favourite, it’d have to be BMW’s Marco Melandri. The Italian missed out on victory on count back after a red flag in the first race in Germany and was comfortably on the podium in the second race. He’s reduced his deficit on the championship lead to just thirty points and will be looking to capitalise on his track knowledge this weekend. Melandri won MotoGP races at Istanbul in 2005 and 2006 and says he really enjoys riding the circuit. A strong result would put Melandri right in the title hunt… so he’s definitely one to watch out for.

Another with experience is winner last time out, Chaz Davies. Two podiums from Davies and Melandri saw BMW take their most successful weekend in World Superbikes and the team will be heading to Istanbul on a high. Davies rode Istanbul twice in the 250cc Grand Prix championship, however failed to finish in the points both times, despite this Davies says it’s a circuit he enjoys. After losing his ride with BMW pulling out in 2013, Davies will be looking to continue to impress manufacturers to earn himself a top ride in 2014 and mathematically, he’s not out of the championship fight just yet.

The Aprilia pairing of Sylvain Guintoli and Eugene Laverty have experience at the circuit too. Laverty has ridden the circuit once in 250cc Grand Prix and Guintoli rode GP races at Istanbul from 2005-2007, including a sixth place in the 2006 250cc race. The pair will be keen to progress with their championship challenge and prevent the likes of Melandri creeping into the fight.

Out of the title contenders, that leaves just Tom Sykes without circuit experience. The Huddersfield man will be looking to learn the track quickly to enable him to challenge his more experienced competitors quickly. Sykes currently leads the championship by just a point so will be hoping to increase that this weekend, but will his lack of experience hinder him?

Toni Elias joins the World Superbike circus this weekend in the Red Devils Aprilia squad as a replacement for Michel Fabrizio who has jumped ship to Pata Honda. Despite having never ridden the RSV4 Aprilia he’ll campaign before, Elias is another with Grand Prix experience of Istanbul and like Melandri, the Spaniard has good history at the circuit. In 2007, he finished second behind Casey Stoner in the 2007 Turkish Grand Prix. Elias has had a tough few years since winning the Moto2 Championship in 2010, can he find his form in Superbikes?