Carlos Checa to retire from racing 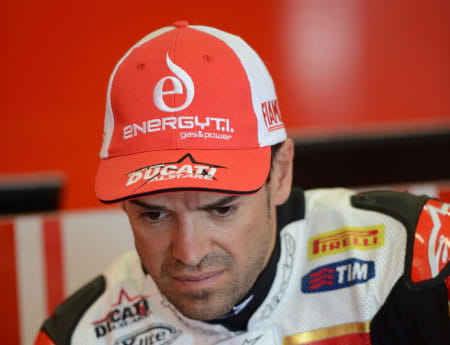 Carlos Checa is set to announce his retirement from racing, according to Spanish journalists. It is expected his decision will be confirmed by Ducati tomorrow morning at Jerez, where the final round of the Superbike World Championship is being held.

Checa, 41 has enjoyed a colourful career. He took two wins in 500cc and a total of twenty-four podiums in the elite Grand Prix class before moving to World Superbikes in 2008 with Hanspree Ten Kate Honda. After a difficult couple of years with the Honda squad, Checa moved to the private Alstare Ducati outfit in 2010 where he achieved his best championship finish to date in third. When the official Ducati team withdrew for 2011, Althea were promoted to be Ducati’s official representation. An astonishing fifteen wins saw Checa comfortably become the first (and currently only) Spaniard to take the World Superbike title.

Remaining with Ducati for 2012 despite almost accepting an offer from BMW, Checa took three wins and finished third. When the Spaniard debuted the new Ducati 1199 Panigale at Phillip Island he impressed all, taking pole position. However, it all started to go downhill from there. Checa tagged the back of Marco Melandri in the opening race, falling heavily on an already injured shoulder and ruling himself out of the second race. Checa returned for the second round in Aragon to take seventh and eighth, while admitting he was far from fit. After two tenth place finishes at Assen, Checa opted to sit out of the Monza round and after a twelfth place finish in the first race at Donington Park, he chose not to race in the second.

It looked like things may be on the up for the Spaniard at Portimao, where he took his best finish of the season in sixth. However a week later at Imola - a circuit the Spaniard had been hugely successful in the past – he couldn’t even finish inside the top ten. The first race at Moscow saw another crash for the Spaniard and despite returning with a positive attitude for Silverstone and Nurburgring, a crash at Istanbul saw Checa out for the remainder of the season.

After such a torrid year, Checa’s retirement brings little shock but as always, it is sad to see one of the greats retire in such a manner. Bike Social wishes Checa all the best for the future.