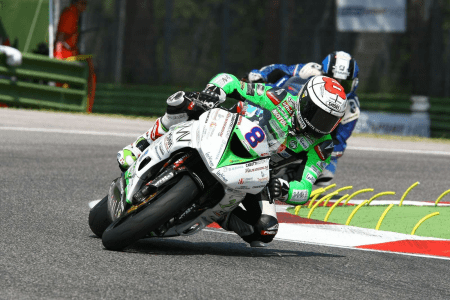 The remainder of racing at the Moscow round of the World Superbike Championship has been cancelled out of respect for Andrea Antonelli.

The young Italian fell from his Goeleven Kawasaki in this afternoon's Supersport race in trecherous conditions and was collected by another motorcycle.The race was immediately red flagged and shortly after WSBK officials announced the rest of the round would be cancelled.

"During today's FIM World Supersport race, at 1:32pm Italian rider Andrea Antonelli (Team Goeleven Kawasaki) crashed on the straight between Turn 14 and Turn 15 and slid on the tarmac.

He was hit by another oncoming rider and suffered a cranium base fracture. The first aid was immediate and the rider was quickly taken to an ambulance where he was intubated. Any attempt of resuscitation was unsuccessful and the death was declared at 2:10pm.

FIM, Dorna and YMS Promotion decided to cancel the activities scheduled for the rest of the day. Everybody involved in the championship extends their deepest condolences to Andrea's family, friends and team at this tragic loss."