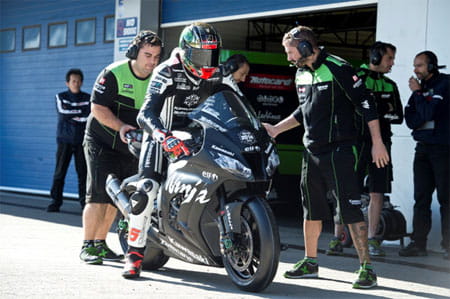 Despite winning the championship just two weeks ago, Kawasaki Racing Team were out in full force at Jerez this week to begin preparations for the battle to retain their crown in 2014. Champ Tom Sykes will once again be joined by tall Frenchman, Loris Baz.

Baz missed the last few rounds of the World Superbike championship after suffering damage to his back following a heavy fall but was fully fit to return for testing this week, using his track time to regain fitness and pace. Whereas Sykes continued to search for ways to improve his already-rapid Kawasaki ZX10R.

The team were joined on circuit by Ducati’s new pairing of Chaz Davies and DavideGiugliano. While the Italian manufacturer has yet to announce which team they’ll be running with for the 2014 season, time cannot be wasted given the extensive winter testing ban. In the absence of a team, the new Ducati duo were present with engineers from the BorgoPanigale Factory.

Crescent Suzuki were also present, despite not having confirmed their riders for 2014. Leon Camier joined the team in testing for the second time since the season end two weeks ago, strongly suggesting the Brit will return with the team for a third year while it’s almost certain he’ll be joined by 2013 British Superbike Champion, Alex Lowes who was also testing with the team, albeit under strict conditions after receiving permission from Samsung Honda, with whom he’s contracted until the end of December.

Aprilia Racing and PATA Honda weren’t present at this week’s test after their riders were on track following the season finale two weeks ago.

More tests are expected over the next few weeks to ensure teams can get as many laps in before the winter testing ban and subsequent ban on official riders testing within the 2014 season.