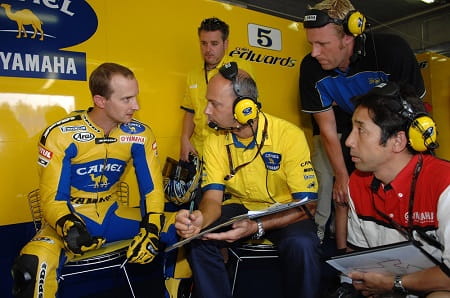 Colin Edwards could continue to ride Grand Prix motorcycles in 2015 with rumours suggesting the Texan looks set to take on a testing role with Yamaha.

Earlier this year Edwards announced that he’d retire at the end of the season but two weeks ago at Indianapolis he confirmed he’d ride his last race for the NGM Forward Yamaha outfit before retiring earlier than planned.

Edwards enjoyed a long relationship with Yamaha, riding machinery powered by the Japanese marque in eight of his eleven Grand Prix seasons and according to Bike Social sources, the Iwata factory has offered him a testing deal for 2015 to help develop the YZR-M1 for the impending change to Michelin tyres.

The French firm will replace Bridgestone as the sole MotoGP tyre supplier in 2016 and manufacturers will begin testing with the new rubber in the next few months. At a press conference in Brno on Friday, Yamaha said they’d begin testing with Michelin tyres from September.

Edwards rode for the Factory Yamaha team between 2005-2007 before a four year stint in the Tech 3 satellite outfit. Edwards moved to NGM Forward Racing to head the short lived CRT class for the 2012-13 seasons before the squad switched to Yamaha powered Open Specification machinery for 2014.