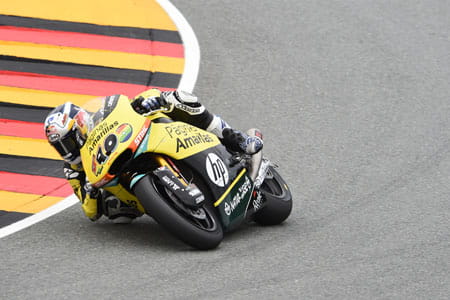 It seems that highly respected MotoGP rider manager, Aki Ajo, has been busy today with news that Maverick Vinales is believed to have agreed a deal with Suzuki for 2015, which will see the talented young Spaniard graduate from Moto2 into the premier MotoGP class.

The reigning Moto3 World Champion – from the same management stable as current Moto3 championship leader, Jack Miller – is currently lying third in the Moto2 standings, having scored 1 victory and 3 podiums in his debut season in the series.

No doubt Ajo’s support of the young rider, as the manager responsible for masterminding the 125GP success of the premier class’s current leader and defending champion, Marc Marquez, was a helping hand in the fast track career development opportunity.

The news of Vinales’ move to Suzuki is hot off the back of our insiders confirming that stable mate Jack Miller will definitely be with Honda for MotoGP in 2015. As with Miller, Vinales is yet to place a signature on a final contract and agree details of the deal.