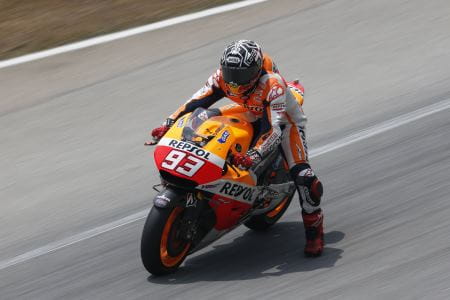 World Champion, Marc Marquez ended the first MotoGP test in Sepang on a high by breaking the circuit lap record set by Casey Stoner in 2012. After day two, it had looked as though Honda may dominate the test but Yamaha showed their pace on the final day, with Marquez pressured by Valentino Rossi whose fastest time was under two tenths off the Repsol Honda man.

Twice World Champ, Jorge Lorenzo was a further tenth behind his team mate with another Yamaha-powered machine in fourth place in the shape of Aleix Espargaro on the FTR M1. Continuing to impress, the older of the Espargaro brothers set a time below the two-minute barrier, defying all expectations and showing that the cheaper, open category bikes can be competitive.

Stefan Bradl set the fifth fastest time ahead of HRC factory rider Dani Pedrosa, who was unable to break the two minute barrier. Many riders did fewer laps today because of extreme temperatures. 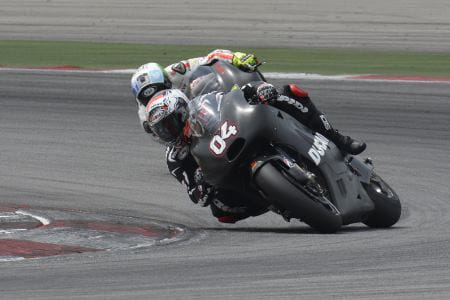 Pol Espargaro set the eighth fastest time from Andrea Iannone, who suffered an almighty crash towards the end of the day. Alvaro Bautista rounded out the top ten, 1.2 seconds from the lead. Bradley Smith couldn’t better his time from Wednesday, setting the eleventh fastest time on the third and final day. Smith’s former team mate, Cal Crutchlow set the twelfth fastest time having shaved three tenths off his Wednesday time.

Nicky Hayden continued to improve on the Aspar Honda, ending the test just under two seconds off the pace on his production Honda, remaining ahead of Colin Edwards on the second FTR Yamaha. Also showing improvement was Randy De Puniet, who managed to get within three-seconds of Marquez’ fastest time on the Suzuki test bike while Scott Redding was unable to better his Wednesday time on the Gresini RCV1000R.

The second Sepang test kicks off at the end of the month, both Day 3 and combined times can be found below.