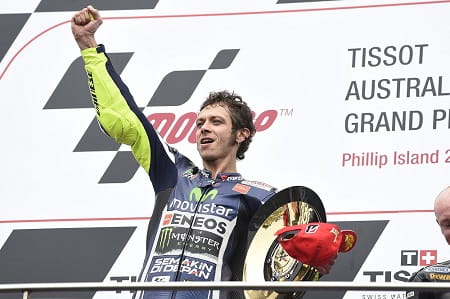 Valentino Rossi has said that when Marc Marquez crashed out of Sunday’s Australian Grand Prix, he told himself that his only option was to win the race despite having been happy to settle for second before the Spaniard lost the front of his Repsol Honda.

Rossi bagged his second victory of the season at Phillip Island when Marquez fell out of a two second lead on the exit of Lukey Heights. With Dani Pedrosa failing to finish, the result sees the Italian elevated to second in the championship with just two rounds remaining.

“I’m so happy because Phillip Island is one of the most important and most beautiful tracks of the season” said Rossi. “I won here many times in the past, but over the last few years I was only able to get onto the podium without winning the race. To come back and take the first position after ten years is great. It's also great to see three Yamahas on the podium!

“The race was tricky. The work that we did during the weekend with the team was very important. We did a fantastic job and made the right front tyre choice. Marquez was not too far in front of me but he had a two second gap, so I decided to focus on my pace and on Jorge. He was very fast during the whole weekend, but for the second position in the championship it was very important to finish in front of him. When I was in front Marquez crashed and I said to myself ‘victory!’”