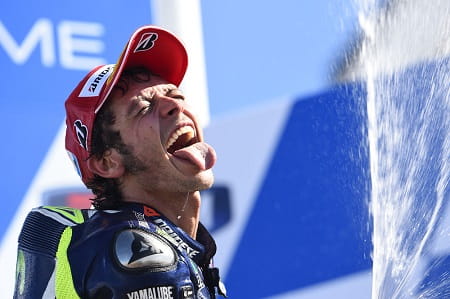 The 25 points added to Rossi’s tally took him to a total of 5,012 points achieved across his Grand Prix racing career and means he boasts an impressive 1,569 point gap to Dani Pedrosa, who sits second in the all-time-points table with 3,443.

Rossi stormed to victory in dominant style at the San Marino Grand Prix with championship leader Marc Marquez falling from his Honda RC213V in pursuit of the Italian’s Yamaha.

“I’m very happy for sure because it’s very special to win here in Misano in front of all the crowd and my family and friends" said Rossi.  "I’m very proud. I made it five years after the last time here, in the same way, fighting with Jorge. During the practice it looked like our Yamaha worked very well so we had a small advantage. I tried to the maximum and so I knew we could fight for victory, I knew for sure I would have to battle with Dani and Jorge and Marc. I tried to push from the start and at the end it was great to have the win more than one year later from my last. I always work hard and never give up and trust that days like this can happen. I have to say thank you to Yamaha, to all my team, to all my friends and all the crowd who support me, especially here in Misano”.