Rossi: 'I thought I could win' 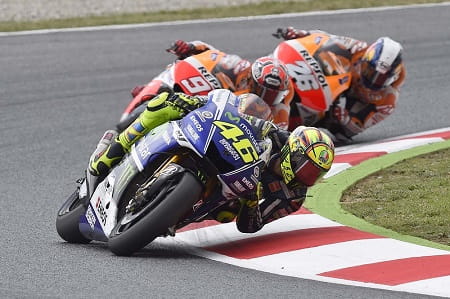 Valentino Rossi has said that while he enjoyed Sunday’s MotoGP race, he was not completely satisfied as he thought he could have taken the victory had the Repsol Hondas not upped the pace in the final few laps.

Rossi, who led the race for well over half distance, became involved in a titanic battle for the lead on the seventh lap with the two Repsol Hondas and Jorge Lorenzo. In what would become the most exciting MotoGP race in decades, Rossi fought with 2013 World Champion Marc Marquez the lead as the lap counter dropped but with two laps to go, the Italian dropped behind Dani Pedrosa as the Honda boys turned up the gas, seemingly with more grip than the Movistar Yamaha.

With the Repsol Honda team mates scrapping for the win, it looked as though Rossi would have to settle for third until a mistake saw Pedrosa run wide after clipping his team mate’s rear wheel, allowing the nine-time World Champion through to take his fourth second place this year.

“I’m so happy because it was a great race, I enjoyed it so much” said Rossi. “I started fast and I was able to stay in front for a long part of the race. I’m not satisfied 100% because I thought I could win but in the last laps they were faster than me. I tried the maximum but also Dani overtook me and I lost time. I did a good race; it is another podium so we have to continue like this.”