Redding: 'It's great to be able to pass on the straights' 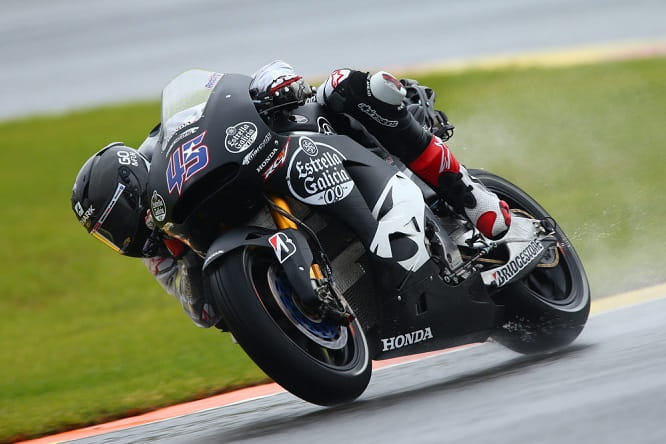 Britain’s Scott Redding enjoyed a positive day of testing in Valencia as he experienced his factory Honda RC213V in the wet for the first time.

Only Nicky Hayden and Alvaro Bautista put in more laps than Redding on Tuesday, with the Marc VDS Honda man completing 42 laps of the sodden Ricardo Tormo circuit.

Having only ridden his production-spec Honda RCV1000R in the wet a handful of times, Redding was keen to get out in the rain at Valencia to gain a better understanding of Bridgestone’s wet tyre option.

“Today was good in the rain. I wanted to have more track time in the rain to try and understand the Bridgestone rain tyres,” Redding explained. “It was really positive, every time I went out I got faster and it was also confidence building. I managed to find the limits more and I think Chris [Pike – Crew Chief] started to understand how this bike and the suspension is starting to work. In the end it was quite a useful day for us.

“This bike is a lot different to my old bike in the wet. The seamless gearbox helps quite a lot because you can shift on an angle, you can use the torque and the better electronics give you more feel in the bottom. I enjoyed this bike a lot more than the production bike. Turning is more or less the same at the moment, we’re still trying to find a way of making it better but we’re still getting to know the bike.” 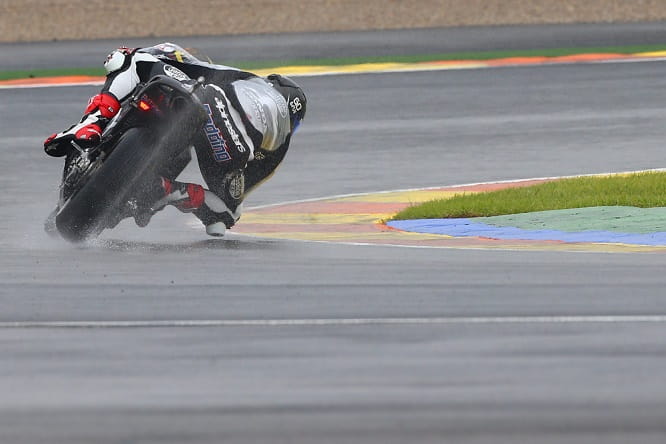 Redding slipped off the RC213V at the final corner towards the end of the day’s testing; a crash he says was caused by the sudden drop in temperature.

“When the sun went down I was getting faster and more comfortable, I felt the grip level was dropping but I was still getting faster so I kept pushing and it was more or less going to be my last lap and I saw I was on a pretty decent lap and I just lost the front.”

After getting his first taste of the bike on Monday, Redding told Bike Social he was surprised at how uncomfortable his new bike felt, describing it as a ‘completely different bike’ to the RCV1000R production racer he’s ridden this year.

“After sleeping on yesterday and coming back this morning I felt 20-30% better in terms of comfort,” Redding continued. “We modified the seat with the bumpers and stuff as I was studying pictures from yesterday and I didn’t look right on the bike. I told the guys we needed to change a few things and they got on with it straight away and I instantly felt better riding. The tank is quite short so when I go into the corner I feel like my weight is sliding off the bike, so we need to somehow make the tank longer and a bit wider. We also need to adjust the seat a little more to make it perfect, this is the time to make it count and get settled on the bike.” 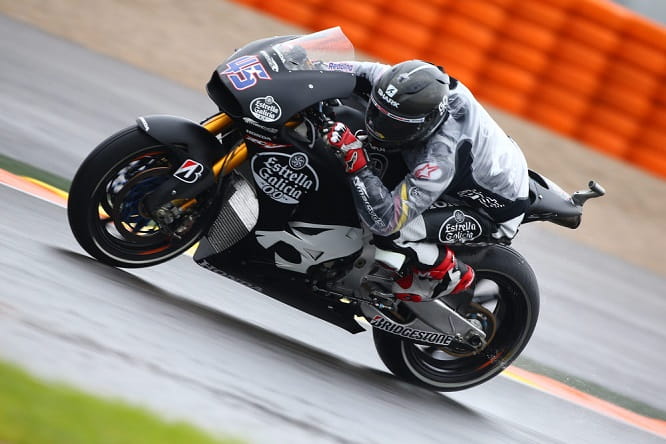 One of the biggest differences between his new and old bikes is the enormous hike in power. While he’s been able to keep up with his factory counterparts through the turns this season they left him for dead on the straights. Today Redding says he used the power to pass a slower bike for the first time.

“I passed Alvaro [Bautista] on the straight earlier today, I got a great exit from the last corner and I was just grinning the whole way down. I remembered in the race he passed me three times on the right and I did the exact same today. It was funny to me as it’s great to not be struggling all the time and having people pass me for a change.”

Feeling confident after a positive day in the wet, Redding is in high spirits ahead of tomorrow’s final day testing, for which the weather forecast is dry.

“Today we started off with the bike not so good but it’s got better and better so for me, in the dry, if we start with a dry setting version of what we had today, it should feel OK out of the blocks. We think we might know the direction but we need to confirm it tomorrow.”