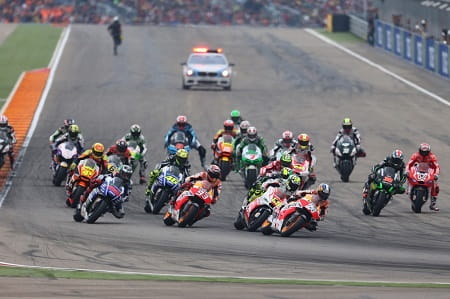 With silly season now over and all but two rides now sorted, the FIM have released a 25-strong entry list for the 2015 MotoGP Championship.

The list contains no surprises and just two spaces are left blank, one at the Gresini Aprilia team and the other at Ioda Racing. The Gresini ride was expected to go to Marco Melandri but it is believed the Italian wants to remain in the World Superbike series in which he can win races.

The grid jumps from 11 factory option bikes to 14 with the return of both Suzuki and Aprilia with two rider efforts.

Four British riders appear on the entry list, which remains provisional, and three of these will ride factory machinery with Cal Crutchlow and Scott Redding moving onto factory Hondas while Bradley Smith remains at Tech 3 Yamaha. One Laverty, Michael, may be departing the premier class (should he not bag the second Aprilia seat) but he'll be replaced by brother Eugene who joins the Aspar Honda team. Eugene runs the Irish flag but for all intents and purposes is British.