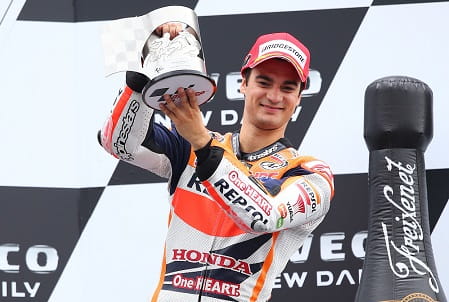 Repsol Honda will have an unchanged line-up for 2015 as it has been announced that Dani Pedrosa has signed a two-year extension with Honda Racing Corporation.

At the start of this season, it was unclear whether Pedrosa would remain with Honda amidst rumours of Jorge Lorenzo wanting to challenge Marc Marquez on equal machinery. There were also rumours that Pedrosa had been offered a big-money deal from Suzuki for the factory’s 2015 return.

In recent months this gossip has died down, with HRC officials stating their priority would be to keep the Spaniard, who has won 25 MotoGP races with the Repsol Honda Team. Pedrosa’s two year extension will see him ride alongside current team mate, Marc Marquez, until at least the end of the 2016 MotoGP season after the 2013 World Champion signed a two-year extension with Honda earlier in the year.

"I'm very happy to be able to announce my renewal with the Repsol Honda Team, and grateful to Honda for the trust they have shown in me for for a further two years” said Pedrosa. It’s the best way for me to continue in my racing career, together with the company I was with in my very first race. I am very excited to give my 100% and continue to work together with everyone at Honda Racing Corporation”