First shot at the title for Marquez in Japan 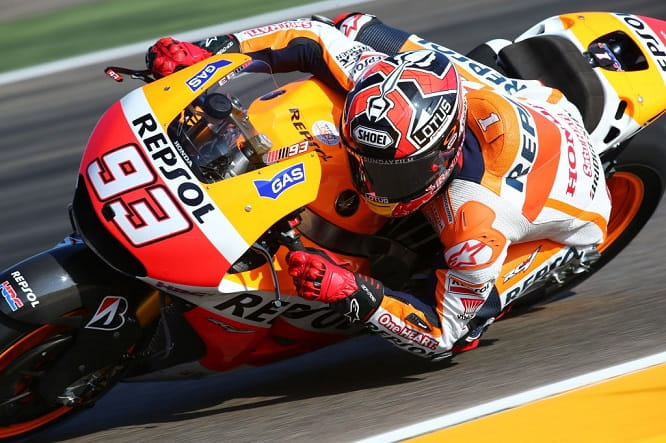 Marc Marquez has his first shot at winning the 2014 MotoGP title this weekend at Honda's home circuit. In a straight fight at the front, Marquez has to do one thing - beat his team mate. However, if for some reason Marquez finds himself further down the table, just as he was two weeks ago at Aragon, things get a little more complicated.

Marquez needs to maintain that 75 point gap to his closest competitor if he's to be crowned champion on Sunday. With Rossi as close as he is to Pedrosa, the Italian's points matter almost as much in the sense that if both Marquez and Pedrosa are off the podium and Rossi finishes higher than 3rd, Marquez misses out on the title on this occasion.

The below table illustrates all possible finishing scenarios for Marquez and the highest position his rivals can be in for him to still take the title.

It reads as, if Marquez finishes X, then the highest Pedrosa can finish is Y... Any cell with a dash means that rider's result is irrelevant in those particular circumstances.

Poor weather plagued last year's Japanese Grand Prix, with heavy fog causing major delays to the schedule. Jorge Lorenzo stormed to victory ahead of Marquez and Pedrosa. Marquez says Motegi was a difficult circuit for Honda last year despite being the test circuit for the Japanese marque.

Marquez wouldn't have as tough a job in Japan had he not risked everything two weeks ago in Aragon. The Spaniard stayed out on slick tyres in much worsening conditions before dramatically falling out of the race. The only saving grace for the 2013 Champion was that his team mate crashed out too. Marquez re-mounted and even managed to extend his championship lead, finishing one point ahead of Pedrosa. Meanwhile at the front, Lorenzo bagged his first victory of the year.