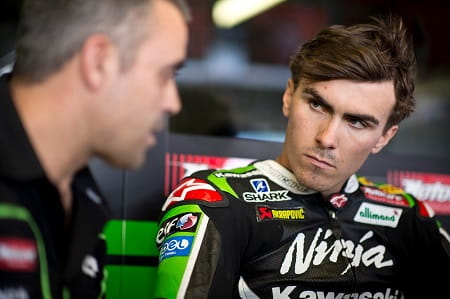 Loris Baz looks set to make a move to the MotoGP paddock in 2015 after being ousted from the Kawasaki World Superbike squad.

Baz joined the Factory Kawasaki outfit midway through the 2012 season and has taken five podiums and two victories for the team and currently lies fourth in the 2014 standings.

Reports suggest the Frenchman was keen to re-sign for Kawasaki but after several spats with teammate Tom Sykes, it looks as though his position within the World Championship leading team is now untenable.

With Dorna (rights holders of the MotoGP World Championship) keen to have a Frenchman closer to the front in MotoGP, Baz’ name is now linked to several Grand Prix seats after it is believed Moto2 rider Johann Zarco turned down a move to the premier class.

Where Baz could end up in MotoGP largely depends on where Scott Redding will ride next year, the Briton is currently earmarked for the final factory-spec Honda RC213V with the issue currently who will run the bike. One potential seat for Baz is aboard one of Aspar’s production Hondas however Nicky Hayden is signed up for one and the second spot in the Jorge Martinez squad is currently being touted as a possible location for Redding’s RC213V.

Should the Aspar deal not materialise for Baz he could take the seat left vacant by Andrea Iannone at Pramac Ducati which is currently being left open for Scott Redding in case nobody finds the funds to run him on the final factory Honda.

Jonathan Rea is tipped to replace Baz on the Kawasaki after turning down a potential MotoGP deal with Aspar, Eugene Laverty could still make the jump to the GP paddock with the team that doesn’t sign Loris Baz out of Aspar and Pramac.

Sykes will remain with Kawasaki for two more years.

How do you think Baz will get on in MotoGP?  or