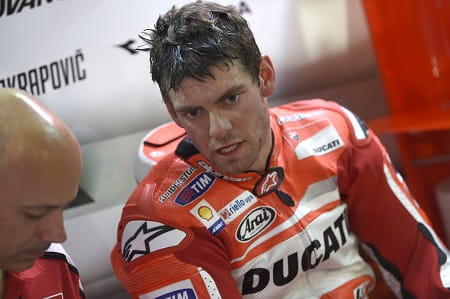 A two-day test for the Ducati MotoGP team at Jerez was hampered by bad weather, meaning neither Cal Crutchlow or Andrea Dovizioso could put in any significant laps throughout the two days.

The team joined numerous World Superbike outfits at the Spanish circuit on Tuesday, when factory riders Andrea Dovizioso and Cal Crutchlow took place in the filming of a promotional video alongside their testing duties.

Following heavy rainfall overnight on Tuesday, the circuit’s changeable conditions on Wednesday did not allow the team to take advantage of the time available on track. Crutchlow has said on twitter that he managed just twenty-five laps over the two day test, which concluded early on Wednesday afternoon.

Ducati say that while no meaningful data could be collected in preparation for the Spanish Grand Prix scheduled to take place next month; both riders were able to confirm to Borgo Panigale engineers that the “full-factory” electronics fitted to their bikes after the Qatar GP were working correctly.

Dovizioso and Crutchlow finished fifth and sixth respectively at Qatar, with the Brit suffering technical issues throughout the race as a result of a failed transponder. The team will now head to Austin for the second round of the championship set to take place next weekend.