Forward Yamaha Boss: "22.5 litres not a problem for us" 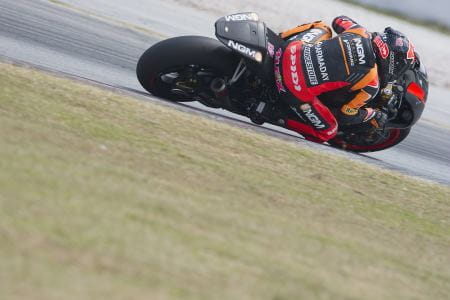 Forward Racing boss, Giovanni Cuzari has said that the restrictions proposed for successful Open Category machines in the MotoGP class this year will not be a problem for his team.

Last week, Ducati announced they would move into the ‘Open Category’ for the season ahead, allowing them to use four extra litres of fuel per race, twelve engines across the season and have access to an extra-soft Bridgestone tyre.

This move has drawn some criticism, especially from Honda, with HRC’s Livio Suppo quite open about his qualms with Ducati’s decision: "At the end of the day, if the Open class has a Factory bike (competing in it), it will not be so cheap and I think that was the aim of the class” he said, speaking to MotoGP.com.

It’s not just Ducati Honda is unhappy with, Fausto Gresini (Team Principal of Go&Fun Gresini Honda) told Bike Social the other day that as far as he’s concerned, the Honda RCV1000R is the only ‘Open’ bike following the ‘true philosophy’ of the new category when compared to both the Ducati and Forward Yamaha.

Aleix Espargaro turned heads on Yamaha’s Open specification machine in the recent pre-season tests at Qatar, setting the fourth fastest time in both outings, including a sub-two-minute lap of the circuit at the first test.

As a result, MotoGP bosses are set to introduce another category into MotoGP for 2014, to be called ‘Factory 2’. This class is to provide a failsafe should any Open Class bike achieve considerable success. The suggested rule proposes that should an Open Class machine achieve three third places, two second places or a victory then it should be placed in the ‘Factory 2’ class for the remainder of the season. This would see the fuel allowance reduced to 22.5 litres (from 24 in the Open Category) and engine allowance reduced to nine rather than 12, thus reducing the advantage should it be necessary.

Looking at his times in Sepang, achieving three podiums is certainly not out of the question for Aleix Espargaro meaning the Forward Yamaha Team could well be moved into the ‘Factory 2’ class. However, Team Principal, Giovanni Cuzari has said this will not be a problem for Espargaro’s Open specification Forward Yamaha.

“We are OK with 22 litres; we don’t need 24 so 22.5 is a dream” said Cuzari, speaking exclusively to Bike Social. “We do need to clarify some things, especially for the future and we are meeting with Carmelo [Ezpeleta] and everyone next week to discuss it but honestly speaking, using 22.5 litres of fuel and nine engines is not a problem for us.”

“What I don’t agree is with the situation with Magnetti Marelli and Ducati. There are questions surrounding the basis of the open-class Marelli ECU Ducati is using, but this is something we will need to clarify next week in Jerez with Carmelo and everybody.”