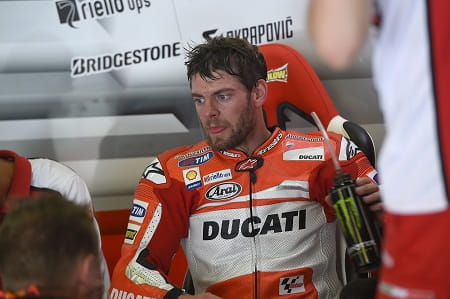 Cal Crutchlow has said he’ll be giving 100% at Assen this weekend, what he says is one of his favourite Grand Prix circuits.

The British rider turned heads at the Cathedral of Speed last year as he clinched his debut MotoGP pole position. He went on to finish third in the race behind fellow Yamaha-man, Valentino Rossi and Marc Marquez.

After a switch to Ducati for 2014, it’ll be a different story for Crutchlow at Assen this time round. Having only finished two out of the seven MotoGP races so far this season, finishing the race is likely to be high on the Coventry man’s list of priorities.

“Assen is definitely one of the tracks in the championship that I like the most” said Crutchlow.  “I had a great race there last year, taking the pole and sharing the podium with Rossi and Marquez. There’s no doubt my championship so far has been difficult, but I’m going to Assen with confidence, and we’ll all give 100%, you can be sure of that.”