Crutchlow: "It's a step in the right direction" 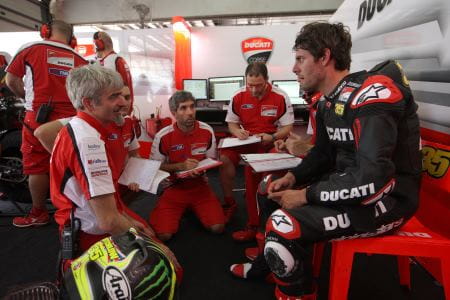 Cal Crutchlow has said Ducati has taken a step in the right direction for 2014 after the second day of testing in Sepang.

The Brit posted the twelfth fastest time today, some 1.2 seconds off the pace of fastest man Marc Marquez. While this may not be anything to shout too loud about, Crutchlow’s time was over 1.3 seconds faster than the one he set yesterday and with Andrea Iannone less than a second off the pace on his Desmosedici, things aren’t looking too bad for the Italian manufacturer.

This is a marked improvement, Ducati’s fastest rider at the end of the first Sepang test in 2012 (Andrea Dovizioso) was over two seconds off the pace, therefore with both factory riders plus Andrea Iannone around a second from the fastest time, the Bologna factory are perhaps in their strongest position in years.

Although, with all of the other prototype machines ahead of them plus Aleix Espargaro on the Open Class FTR Yamaha, Ducati have still got their work cut out and Crutchlow knows it.

“I think I’m one of the riders who made the biggest improvement in lap times today. Yesterday I was a bit rusty on the bike and didn’t feel too comfortable but that was only me” said Crutchlow after the second day of testing.

“We tested the GP14 all day today and went through some settings we didn’t have time to try yesterday. The result was positive, so that’s a step in the right direction. With the new bike you come into the corner better, which is a positive Ducati have been looking for. Overall I’d say I’m quite satisfied, but we’re still some way off the front guys.”

You can view a full round up of today’s test times here. Testing concludes tomorrow.