Can Marquez return to the top step in Aragon? 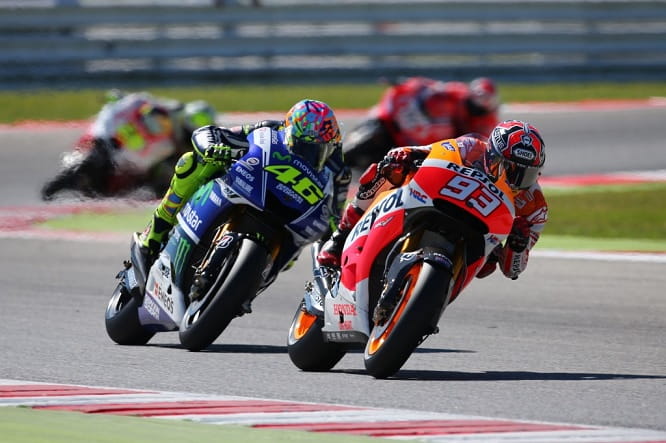 The last time Marc Marquez didn’t win a MotoGP race, he came out of the blocks at the next round on fire and obliterated his opponents, taking absolutely no prisoners (ask Jorge Lorenzo) on the way to victory his 11th victory of the season at Silverstone.

Last time out, Marc Marquez failed to win again. This time however, it wasn’t because he had a dodgy front tyre (not that Honda ever confirmed this was the case in Brno, but it was), it was because he made his first mistake in a race since Mugello 2013 and crashed out.

In Misano we saw something special, we saw Valentino Rossi take a race victory with all of his opponents fully fit and fighting. You may say Marquez crashed out, yes he did, but he crashed out in pursuit of a rapid Valentino Rossi. If you re-watch the footage from the first few laps you will not see the Marc Marquez who has stormed to victory 11 times this season – you will see a Marc Marquez struggling to keep up with the pace set by his Italian rival, missing apexes, constantly on the brakes too late; in other words, on the absolute limit. The fact of the matter is the Yamaha was faster than the Honda around Misano and not even the fastest Grand Prix racer in the world was going to change that.

Unfortunately for Yamaha, Rossi and Lorenzo, that’s probably not something that’ll carry through to this weekend. Yamaha have never won at Aragon. Casey Stoner took MotoGP’s first ever victory at the circuit aboard the Ducati in 2010 and the three rounds since have been dominated by Honda, first in the hands of Stoner, then Pedrosa and then Marquez last season. 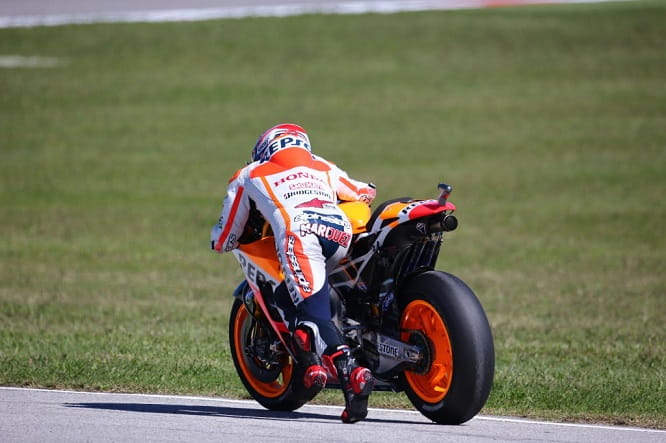 The manufacturer cards are back in Marquez’ hands but you can never rule out a surprise result. Rossi will be full of beans after taking a landmark victory in front of his home crowd and the Italian winning will have also spurred on his teammate who is yet to stand on the top step this season. Of course, at a Honda-circuit you can’t rule out Pedrosa either.

One thing that could stop Marquez this weekend is a little bit of worry; he said in the pre-race press conference that it’s now time to start thinking about the title. That is, if he bins it again he’s going to do some sizeable damage to the lead he worked so hard to build up in the first half of the season. If he finishes second to Rossi or Pedrosa in the next three rounds he will win the title in Australia. Not too shabby. However, should he increase his 74 point lead this weekend he could take the title in Japan. Fancy that, taking the title on a Honda, in front of Honda big-wigs at a circuit owned by Honda. Hmm… Will Marc Marquez really be settling for second this weekend?