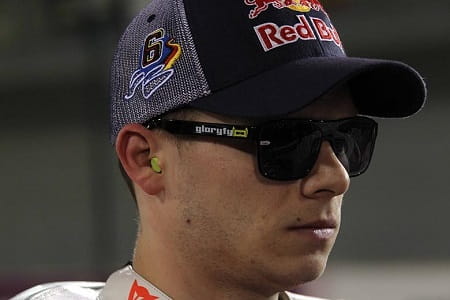 Stefan Bradl will move to Forward Racing for the 2015 MotoGP season after being ousted from the LCR Honda team in favour of Britain’s Cal Crutchlow.

2014 is Bradl’s third year with the LCR Honda team and despite several hints that he would be able to keep up with the leading quartet of Marquez, Rossi, Pedrosa and Lorenzo, overall he’s failed to impress. His lack of results left him towards the bottom of HRC’s list of preferred riders for the 2015 season, fully aware of this, Bradl opted to cut his losses and jump ship.

With Aleix Espargaro heading to Suzuki, Bradl will take over as the team’s lead rider and Yamaha’s best hope of finishing on top of the open category in 2015, in which there is expected to be a much stronger attack from Honda with a new, improved RCV1000R.

It’ll be an all new line-up for Forward Racing with Colin Edwards retiring at the end of the season. Who will ride alongside Bradl is currently up in the air although with Yamaha’s serious lack of young talent, it’s likely a rider from the Moto2 or Moto3 classes will receive the call up.

“It’s with great pleasure that we welcome Stefan Bradl to our team" said Forward Racing boss, Giovanni Cuzari. "We believe that Stefan is a strong rider, that our package will suit his riding style very well and we look forward to start this new cooperation. Moreover, Germany represents an important market and it’s important to have a strong German rider in our line up.”

To catch up on all the latest and expected moves for MotoGP in 2015, check our Silly Season update!