As part of our “You ask, GP stars answer” series we put your questions to British racing legend, Neil Hodgson. Here’s what he had to say: 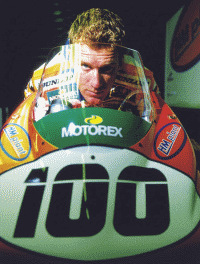 Who or what got you interested in racing?
To be honest, my Dad used to race when I was younger and I when I was six or seven I had my own bike but I wasn’t really interested. My older brother was interested and I watched him a lot and by the time I was 9 I got my first crosser. I started racing between the ages of 9 and 15 and by 16 I was road racing.

If you were still racing, who would you ride for?

Good question, I’d have to say Repsol Honda but only because the bike and leathers look so cool

Do you have any regrets from your career?

To be honest, no. I did so much better than I ever thought I would and it’s given me a great platform to do everything that I love. I live and breathe the biking industry and I wouldn’t be able to do what I do today if I hadn’t done what I did yesterday.

Do you have a road bike?

I’m a bit embarrassed to say that I don’t have a road bike and I never had. I have much more fun on the track. If I was to ride on the road, I’d probably get done for speeding!

Brands Hatch. I absolutely love it there, back in the late 90s the atmosphere was absolutely electric. I loved it.

The 2000 Ducati 996, the orange INS sponsored GSE machine. That bike always gave me a lot of feedback when I was riding it; I knew when I got to the limits. It was a fantastic bike to ride and we took the title on it.

What do you think of Cal’s move to Ducati?

I like Cal, he’s a great guy and everything he seems to touch turns to gold, so I’m going to say he can do it. He’s got the ability and Ducati want to win.

Who did you enjoy beating the most?

Mainly Chris Walker and Rubens Xaus. It was always satisfying to win against these guys, but off the track we always got on well!

Do you have any lucky pants?

I'm a clean character to be honest, I couldn't bear the thought of wearing the same pants every race, they’d smell a bit!

Did you often scare yourself on track?
Yeah, mainly when things were out of my control like a crash in front of me. Riding in the wet with the bike aquaplaning. When you aren't in control it scares you a lot, but it makes you a better rider to be a bit scared!

What’s the proudest moment in your career?
Winning in 2000 as a wildcard at Donington Park.

What are you up to these days?
Busy man, jack of all trades and master of none! I do a lot of track day teaching, work with Ducati as the ambassador for the 848 challenge, lots of PR for them and also test their road bikes in Italy. I do some features for a motorcycle newspaper and more recently I have launched my own t-shirt range!