Why are Suzuki waiting until 2015 to return to MotoGP? 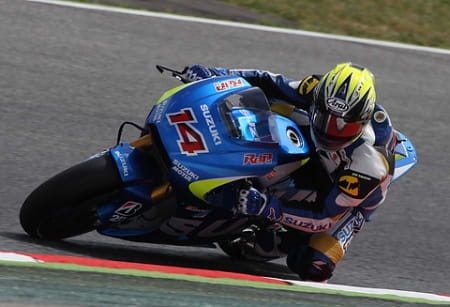 Suzuki announced yesterday that they would be returning to the MotoGP paddock in 2015, not 2014 as was rumoured. After ‘temporarily’ withdrawing from the elite racing scene after the 2011 season, Suzuki suggested their return would be within a few years. When the Japanese manufacturer went public with their testing programme for a brand new prototype machine earlier this year it was largely expected the return would be next season.

After signing former Yamaha team director Davide Brivio as team manager and the experienced Randy de Puniet as a development rider, it became clear that Suzuki wouldn’t be returning to make up numbers. But you have to ask, why 2015? Suzuki are currently undergoing their first public test - the first time the machine would be compared to its future competitors – and on the first day, de Puniet posted a time only 0.7 seconds slower than the fastest lap recorded by Sunday’s race winner Jorge Lorenzo. If the bike is that close already, why not develop it throughout a season’s racing?

Lack of development is Suzuki’s official line, with a limit of five sealed engines per season it’s not easy to engage in a full research and development programme as well as focusing on results, especially with a brand new motorcycle. Suzuki believe they are better off focusing on developing their machine over the next year without the limitations of current MotoGP teams.

Some suggest the delay is related to rider choice, nobody of race winning calibre (perhaps with the exception of Cal Crutchlow) is out of contract at the end of this year and if Suzuki are looking to make an impact upon return, it could very well be that they are eying up a fast rider. While this does sound unrealistic at first, if you then consider how many more years Dani Pedrosa will last at Honda if he fails to win a title in the current or next season it begins to sound plausible…

There are other factors too, such as Dorna introducing new rules meaning that existing MotoGP teams will receive help with funding in 2014 for things such as tyres and logistics, whereas newly introduced teams will have no financial support from the organisers and have to foot the entire bill themselves. While this seems counterproductive at first, what Ezpeleta is attempting to achieve is to ensure that MotoGP teams are as competitive as possible. To do this, Dorna are putting a cap on the number of spaces on the GP grid at the current figure plus four potential new spaces (i.e. enough room for two new two-rider teams). At the end of 2014, the teams at the bottom of the points table will be the teams that don’t receive the funding in 2015. If Suzuki returned in 2014, they’d have to foot the entire bill while other teams received financial help, however if they finished higher up the order at the end of the season they’d qualify for the support in 2015. Suzuki could well have delayed their return as they don’t have the budget yet and need another year to pull in funds and prove themselves to potential sponsors through testing.

While the official line is the need for more development time, it is likely that all of these factors and perhaps more contributed to Suzuki’s decision to return a year later than originally suggested. What will be interesting to see is the performance of the team throughout their testing programme, whether we’ll see any wildcard entries in 2014 and of course, who they will sign in an extremely open rider market at the end of next year.