The final Showdown: All or nothing for Lorenzo and Marquez in Valencia 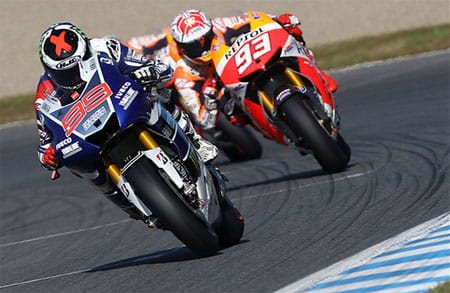 Seven years ago, the MotoGP paddock arrived in Valencia for the final round of the 2006 MotoGP season. Valentino Rossi had regained the championship lead at the previous round in Portugal, placing him eight points ahead of his only rival, Nicky Hayden. Many thought the battle for the title was over; after all it was Valentino Rossi – a man who had been champion for the past five years. There was almost no doubt of him failing to finish ahead of, or second to the American who had only taken two victories that season. As most of you will know, Rossi fell on the first lap and despite re-joining the race could not finish higher than thirteenth leaving Nicky Hayden to take the title by just five points.

In the five years following, the MotoGP title was settled prior to the final round, somewhat dumbing the excitement. However for the first time since that season in 2006, the focal point of the final round of the championship in Valencia is not who will be riding which bike come the post-season test on Tuesday, but which Spaniard will be crowned champion on Sunday?

Marc Marquez – the 2013 sensation – currently leads the experienced, already two-time champion Jorge Lorenzo by thirteen points. It’s a comfortable enough margin for Marc to finish fourth should Lorenzo win but with this has to come an enormous amount of pressure. Given what we’ve seen so far this season, the 2013 MotoGP championship could well turn out to be winner takes all, that is should DaniPedrosa or Valentino Rossi not get in the way.

Honda have said there are to be no team orders, an age old policy that nobody’s really believed in the past, but Marc Marquez and DaniPedrosa aren’t best of friends. After Aragon, is it unreasonable to suggest Pedrosa wouldn’t be overly keen in going out of his way to help the younger Spaniard take the title?Pedrosa’s plan has to be to go for victory, that’s what is best for him and it also eases some of the pressure on Marquez, who would need to finish eighth should Lorenzo finish second.

At Yamaha, on the other hand, Rossi has made it clear he will be out to help Lorenzo in any way he can. That is of course, if he can; the Doctor has struggled to match the pace of the top three in many races this year, as shown by his sheer amount of fourth place finishes. If for whatever reason, Marquez is not at the front either, Rossi could play a pivotal role in the championship in scoring yet another fourth place to leave Marquez in fifth or worse.

Stefan Bradl and Alvaro Bautista will be looking to take home a decent result for the end of the season but will be mindful of helping Marquez to impress HRC. Cal Crutchlow on the other hand perhaps won’t be as loyal to his current manufacturer, bearing in mind he’ll be riding for a new one come Tuesday with no love lost for Yamaha in recent months.

With that margin, Marquez has to be the favourite but anything could happen, especially if the weather comes into play as often is the case at Valencia.

It’s not just the MotoGP title to be settled either, with just five points separating the top three in Moto3. Despite falling last time out in Japan, LiusSalom leads the championship from Alex Rins and Maverick Vinales. Whoever finishes highest out of the three will take the title. The Moto2 title, on the other hand is all tied up after that first lap incident in Motegi, that’s not to say riders such as Scott Redding and Esteve Rabat won’t be looking to make a point at the final round.