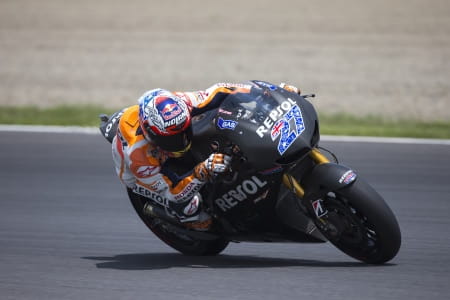 Casey Stoner has completed a ‘successful’ test on board the Honda RC213V in Motegi. Rain on Tuesday saw the test, originally scheduled for two days, cut short after the 2007 and 2011 MotoGP champion only managed six laps in the dry on Tuesday.

Stoner tested the 2013 Honda RC213V this morning before switching to the 2014 machine, tested by team regulars, Marc Marquez and Dani Pedrosa at Aragon. Stoner put in a total of forty-seven laps, his first since his retirement from MotoGP at the end of 2012. HRC have not released any lap times.

However, despite lots of (completely fabricated) rumours, Stoner has said this test does not mean he’ll be participating in any GP races in the near future and won’t change his mind about retirement.

"Thankfully today the weather improved a lot, in fact it was pretty hot, and we were able to get some good track time and work on our test programme” said Stoner.

“We had a productive day in general and thankfully the test plan wasn't too hectic, so we were able to get most of it done today, after yesterday's washout. It was great to see the team, even if there were only a few people here, and I thank Honda for all their support as ever. It felt really good to get back on the bike after 9 months and I'm happy with how the test went, but it doesn't change my mind about the wild cards - this is not something I am planning to do"