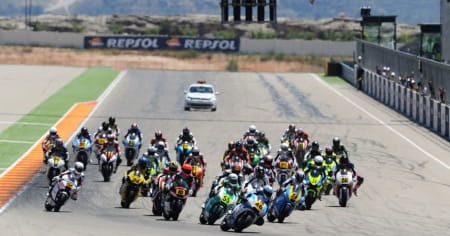 Previously under control of the Spanish motorcycle federation, the CEV will come under the umbrella of the FIM and branch out of Spain to also make appearances at other European Grand Prix circuits for 2014.

With participants from 23 different countries, the CEV Repsol is a great platform that welcomes talented riders from all over the world to learn their trade in one of the most professional environments outside the FIM Road Racing World Championship Grand Prix. And with much of the current talent having already passed through the ranks over the years, the CEV Repsol and FIM partnership is sure to keep feeding talent for many years to come.

Previous British125cc champion, Kyle Ryde currently rides in the CEV championships alongside Wayne Ryan in the Racing Steps Foundation team. It is undo

Dorna CEO Carmelo Ezpeleta comments: "I am very pleased about the new stage that awaits the CEV Repsol. That this championship is open internationally and now comes under the scope of the FIM means that all the work done in previous years has clearly helped to strengthen this championship and will ensure that it continues nurturing great riders that can make it into all three MotoGP World Championship categories."