Ryan and Ryde to wildcard in Silverstone Moto3 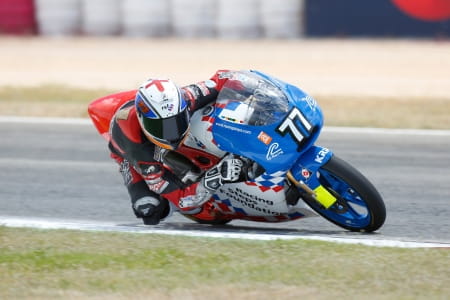 It has been announced that two British wildcards will be entered to the Moto3 race at this year’s British Grand Prix.

Ryan secured his first win of the season at the opening CIV round in Mugello in April and followed up with a win and fastest lap in the CEV season-opener at Catalunya a fortnight later. The New Romney teenager currently lies fourth in the rider standings in the Spanish series.

Team-mate and CEV Moto3 rookie Kyle Ryde signalled his potential in the series with an impressive ride to third place in the second race at the opening round. The Nottinghamshire rider is 14th in the championship.

The pair's on-track rivalry dates back to the 2011 British 125GP Championship in which Ryde beat Ryan to the title by two points with third place to Ryan's win at the final round at Brands Hatch.

The KRP riders will compete on KRP's Honda-powered M3-02 chassis.

You can win tickets to see them in action in our latest competition, more details here: http://bit.ly/1c87K93