Rossi to split with Burgess for 2014 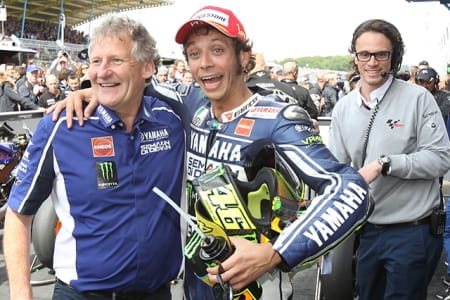 Valentino Rossi has announced a sensational split from long-time Crew Chief, Jerry Burgess. The news - which has left the GP paddock stunned - came during this afternoon’s press conference ahead of the final round of the MotoGP championship at Valencia.

Burgess has worked with Rossi since he moved to MotoGP with Honda in 2001, taking him to all seven of his premier class titles however the Italian has now decided it is time for change. The Australian followed Rossi from Honda to Yamaha in 2004, from Yamaha to Ducati in 2011 and came back to Yamaha with the Doctor for 2013; however it hasn’t been the success story they’d been hoping for. Rossi has taken just one win this season and has been struggling to get on the podium in the majority of races.

Rossi says the reason behind the decision is him wanting to try a new direction for 2014, which he’s hinted won’t be his last year in MotoGP. "I think that next year Jeremy will not be my chief mechanic," said Rossi. "It was a very difficult decision for me because I have a great history with Jeremy. He is not just my chief mechanic, he is like a part of the family. My 'father' for racing.”

"But I decide for next year I need to change something to try to find new motivation and a new boost - to improve my level, my speed. I think that this is our last race together with Jerry, yes."

It is currently unknown who will be replacing Burgess.