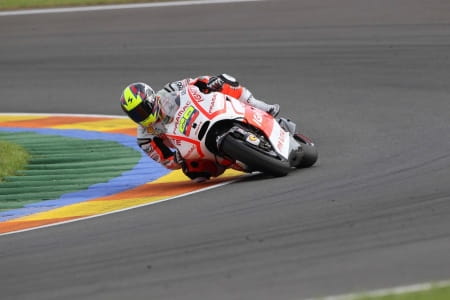 Pramac Ducati have drawn a close to the MotoGP silly season (with the exception of remaining CRT rides) by announcing Yonny Hernandez will once again line up alongside Andrea Iannone in 2014. Hernandez will be on Ducati’s “Open” class (the class replacing CRT) bike in 2014 using the Dorna spec-ECU.

Hernandez replaced Ben Spies in the Pramac Ducati team from Aragon until the end of the season, after it was announced the American would sit out the rest of the season (and subsequently retire). The Colombian’s best result on the Desmosedici was tenth at the Malaysian Grand Prix in the Sepang.

With riding the non-factory Ducati, Hernandez will be able to run the new super-soft tyres and an extra four litres of fuel compared to his factory team mates. Iannone will continue on board the factory machine.

"I am very happy to be here today. It’s a great opportunity for me to continue with the Pramac team, and the fact that we have confirmed our partnership for another year makes me really enthusiastic” explains Hernandez.

“I cannot wait to get on track and try the new ‘Open’ bike, even though that won’t happen here in Valencia, and I'm also curious to try the new tyres. I am proud to be the second Latin American rider, and the first Colombian, to ride with this team in the premier class. I know that I have to work hard, but the new 'Open' category is very interesting. I really want to go out on track and start learning. I want to thank Pramac, Ducati and all those who have made this new adventure possible.”