MotoGP Brno: Can Marquez be stopped? 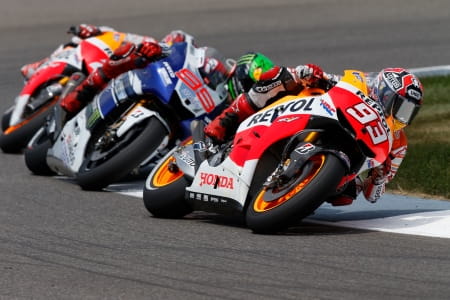 MotoGP heads to Brno this weekend for the eleventh round of the championship, with Marc Marquez leading the title chase from Dani Pedrosa and Jorge Lorenzo. Brno marks the second in a series of three consecutive race weekends, which started at Indianapolis last weekend. After a ‘quick trip’ back across the Atlantic, the guys will be back out on track less than a week after their last appearance in America.

After he’s taken three wins on the bounce, few would bet against twenty-year old rookie, Marc Marquez. As with many circuits this year, the Spaniard won the Moto2 race there last year so while he may not have MotoGP experience of the track, he certainly has winning experience. Although with Marquez, as Laguna showed, not having experience doesn’t really stop him… A win in Brno would see Marquez lead the championship by at least twenty-six points, putting him ahead of the rest of the field by more than a race win.

Dani Pedrosa showed last year he’s more than willing to make some hard passes towards the end of a race as he displaced Jorge Lorenzo who had led for almost the entire race. He’ll be looking for a repeat of last year’s result to enable him to start clawing back his team-mate’s lead in the championship.

Visibly disappointed with third place at Indianapolis, Jorge Lorenzo will be looking for nothing less than a win ahead of the six or so races in the championship, many of which favouring the characteristics of the Honda. With the Majorcan already sitting thirty-five points behind the championship lead, he’s got some work on his hands if he’s to retain the title.

Having taken five victories at Brno, Valentino Rossi has won at the circuit more than any other rider. After a somewhat difficult 2013 campaign, the Doctor will be looking to return to the top step for the first time since Assen. It will be difficult though, despite being able to run a similar pace to team-mate Lorenzo at the end of races, the nine-time World Champion seems to struggle at the beginning.

12 months ago at Brno, Britain’s Cal Crutchlow took his first ever MotoGP podium. Having taken four podiums already this year, he will be keen to get back on the box at Brno.

Alvaro Bautista will be looking to continue his strong current form. A sixth place finish at Indianapolis somewhat understates the Spaniard’s race for performance, which throughout he was embroiled in a battle for fourth with Crutchlow and later Rossi. With Stefan Bradl’s contract signed at Indianpolis last weekend, Bautista now holds the only prototype machine available for 2014 and he’ll be keen to keep hold of it.

In Moto3, Luis Salom will look to make up for finishing off the podium for the first time this season. There’s no doubt Maverick Vinales and Alex Rins will continue to snap at the elder Spaniard’s heels. Guaranteed to lead the championship irrespective of what happens at Brno, Scott Redding will be looking to increase that lead while Spaniard Espargaro will be keen to see the opposite happen after some hard racing at Indianapolis.