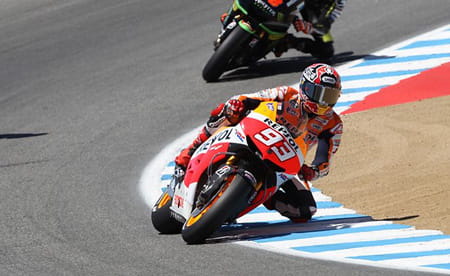 Repsol Honda's Marc Marquez has clinched victory at this weekend’s MotoGP at Laguna Seca – his first-ever visit to the USA track.

Stefan Bradl qualified on pole for the 32-lap race and led for the first 18 laps. However, determined ‘rookie’ Marquez, who started from second place on the grid, passed the German at the final left-hand turn of lap 18 and pulled out a lead. Spaniard Marquez maintained his position at the front of the field until the chequered flag to seal his third MotoGP victory so far this season.

Meanwhile Valentino Rossi continued his return to form with a third place finish at the American circuit. Injured Dani Pedrosa scored fifth while Jorge Lorenzo – who broke his collarbone at Assen three weeks ago – also achieved a valiant points-scoring finish with sixth in the race.

Having achieved podium finishes at the last few rounds, Brit Cal Crutchlow was left disappointed with his seventh place finish. He said: “That was a difficult end to a very difficult weekend and in all honesty I never got comfortable with the bike at any stage here. It is my worst result of the season so far and I can’t be happy because I gave up some valuable points in the Championship. Maybe last year in the same situation I would have pushed and not finished, so that is one positive we can take from what was a tough weekend and it certainly isn’t how I wanted to go into the summer break… It has been a pretty hectic month so now I am looking forward to getting some rest and I will be back even more motivated in Indianapolis.”

Marquez now leads the championship standings with a 16-point advantage over Pedrosa and Lorenzo heads to the next event at Indianapolis in third.