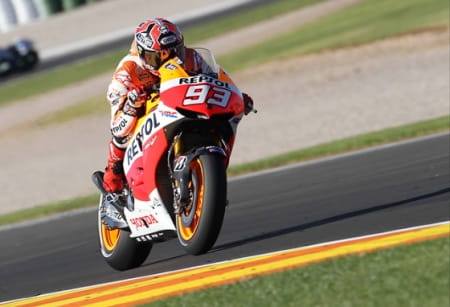 A clever race from Marc Marquez has seen him take the MotoGP crown today in Valencia, making him the youngest ever champion in the elite class of motorcycle racing at twenty years and eight months old.

Jorge Lorenzo did his best to prevent the young Spaniard from taking the title, trying to back the pack up hoping the likes of Rossi and Crutchlow would get in the race at the front. A third championship wasn't meant to be for the Mallorcan as the race order settled out. Marquez let Pedrosa into second with a few laps remaining, to bring it home in third place to take the title.

Marquez is the first rookie to win the championship since Kenny Roberts in 1978. His 2013 season was nothing but consistent, finishing on the podium in every race with the exception of Mugello in which he fell from second and Phillip Island where he was disqualified. Six victories was enough for the rookie to take the title in 2013.