Lorenzo wins at home in Barcelona 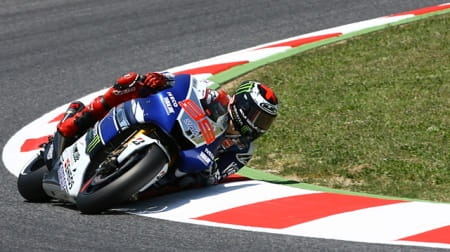 Jorge Lorenzo took his third win of the season at this weekend’s Grand Prix de Catalunya. The Spaniard took off from the first lap and his smooth style saw him take the win comfortably as the Repsol Hondas began to tangle themselves together.

After setting a stunning pole position on Saturday, Pedrosa was the one to lead the chase for Lorenzo with team mate Marc Marquez close behind him. Marquez attempted to pass towards the end of the race; nearly going into the back of his more experienced team mate’s RC213V but this didn’t put him off. The youngster put in an electric last lap to lose out to Pedrosa by just a few hundredths of a second.

Britain’s Cal Crutchlow made an impressive start in fourth ahead of Valentino Rossi, however lost the front end on the sixth lap, taking his first DNF of the season. After Crutchlow’s fall, it looked as though nine-time champion Rossi had the pace to run with the front three, although as the race progressed the Italian slipped back, finishing around 4 seconds from Jorge Lorenzo.

Alvaro Bautista saw his second first-lap crash in as many races while Nicky Hayden fell from sixth position after passing LCR Honda’s Stefan Bradl. A strong ride (and a few crashes ahead of him) saw Bradley Smith take his career-best result in sixth place from best placed Ducati, Dovizioso in seventh. Aleix Espargaro took another top ten finish on his Aprilia CRT machine, ahead of Colin Edwards and Michele Pirro.