Lorenzo to fly to Laguna with aim of racing 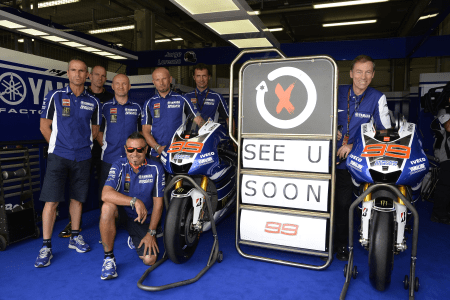 Jorge Lorenzo is to fly to the U.S. for the ninth round of the MotoGP championship from Laguna Seca with an aim of racing, despite having said he wouldn't.

Lorenzo broke his collarbone after falling in practice at Assen three weeks ago, he went on to race on the Sunday and took fifth place. Last Friday, during the second practice session in Germany, Lorenzo had another crash, damaging the titanium plate on his collarbone. Lorenzo was subsequently ruled out of the Sachsenring round of MotoGP and had said he would miss Laguna too.

The double World Champion tweeted this message on Saturday: "To the people asking me about Laguna, I would like to say that I don't want to take more risk and have a good recovery. See you in Indy!"

However it would seem plans have changed, as the Spaniard is set to board a plane to California later today.

"Finally we have decided to go to Laguna Seca." said Lorenzo.

"Following the final medical check and after speaking with Doctor Rodriguez we are going to try. At the beginning I seriously thought that it might have been convenient to take the necessary time to recover and be back at Indy but in the last two days I have felt much better so now I want to be there, although I will try to not take too many risks. I want to be there also for the fans, for the championship but especially for my team, that is waiting for me. I want to thank everybody for all the support I have received so far and I want to say "thank you" to the doctors who took care of me after the crash at Sachsenring, both at the Clinica Mobile and at the Hospital General de Catalunya, especially Doctors Rodriguez and Cots."

Dani Pedrosa, having also suffered a collarbone injury in Sachsenring is also looking to race this weekend.